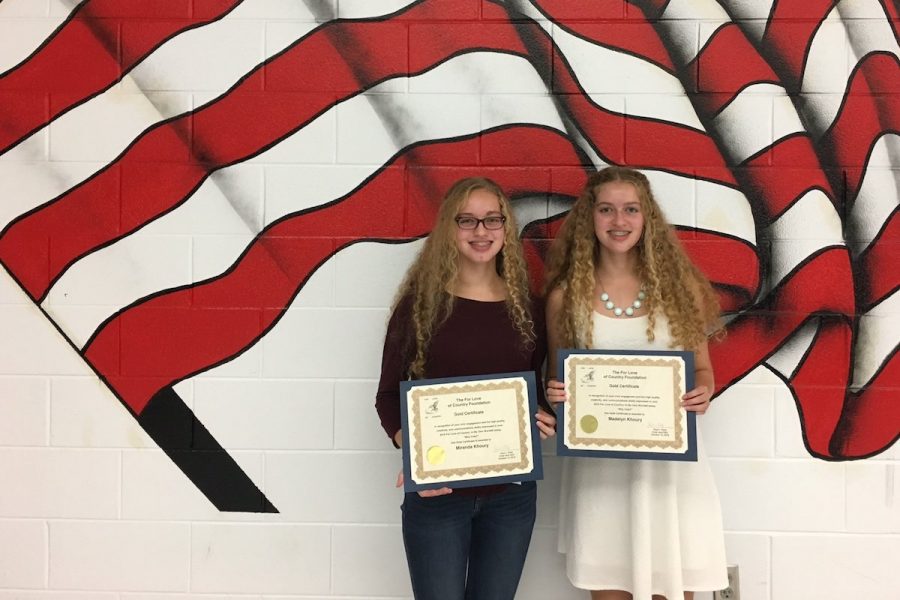 Madelyn and Miranda Khoury hold up their certificates honoring their "For Love of Country" essays.

“Why vote?” It may seem like an ineffectual question to ask people who are not yet eligible to do so, but students across Fairfax County had an answer.

Hosted by the Fairfax County Public Library and the For Love of Country Foundation, the eighth annual “For Love of Country: In My Own Words” essay and poetry contest, where students may submit individually written responses, asked this prompt. There were four tiers for recognitions: gold, silver, bronze and certificates of merit. Prizes for gold, silver and bronze merits also included $100, $50 and $25, respectively. Winners were notified on Oct. 1, and the prizes were awarded from Oct. 9 to 15. Among the gold essay winners were freshmen and sisters Madelyn and Miranda Khoury.

“I got the email in the morning before I went to school, and it just kind of made my day,” Miranda Khoury said. “Winning [a writing contest] was cool for me, because I don’t do these often.”

Both Madelyn and Miranda Khoury had first heard about the contest through flyers at their local library years ago, but they did not participate because the topics did not inspire them as much as this year’s.

“I’m pretty sure last year’s was something along the lines of ‘I appreciate my Congressman/woman because…”, which I just didn’t feel prepared to write, because I’m not super familiar with all our local political players,” Madelyn Khoury said. “But, I thought I’d challenge myself this year.”

Madelyn Khoury’s essay included her views on the importance of voting in today’s world, commenting on the upcoming presidential election.

“My general approach was to take a contemporary look at the nation’s voting mentality, and incorporate current events,” Madelyn Khoury said. “I focused on the turmoil we are facing today and how so many people are considering not voting in the 2016 election, and why now is exactly the time when our right to vote is so useful.”

Miranda Khoury was also influenced by the election.

“There’s so many other people in different countries who don’t get this opportunity, and we do,” Miranda Khoury said. “We get to actually decide what rules we want to be instituted, who we want to represent us and I don’t see why anyone wouldn’t want to partake in that.”

Madelyn and Miranda Khoury began their essays a few weeks to a month before the time it was due, 5 p.m. Sept. 3. However, most of the writing was done hours before they turned the essays in.

“I remembered I had it, and I thought, ‘You know, I have free time today, so I’ll just spend a few hours finishing it up,’” Miranda Khoury said. “So I did, and I turned it in that day.”

After turning her essay in, Madelyn was unsure of what recognition her essay would receive, but was content with her work.

“I didn’t really know anything about the judges’ criteria or the competitive base, so I wasn’t really expecting to win,” Madelyn Khoury said. “I was just satisfied on a personal level for accomplishing something I could be proud of in such a short time span.”