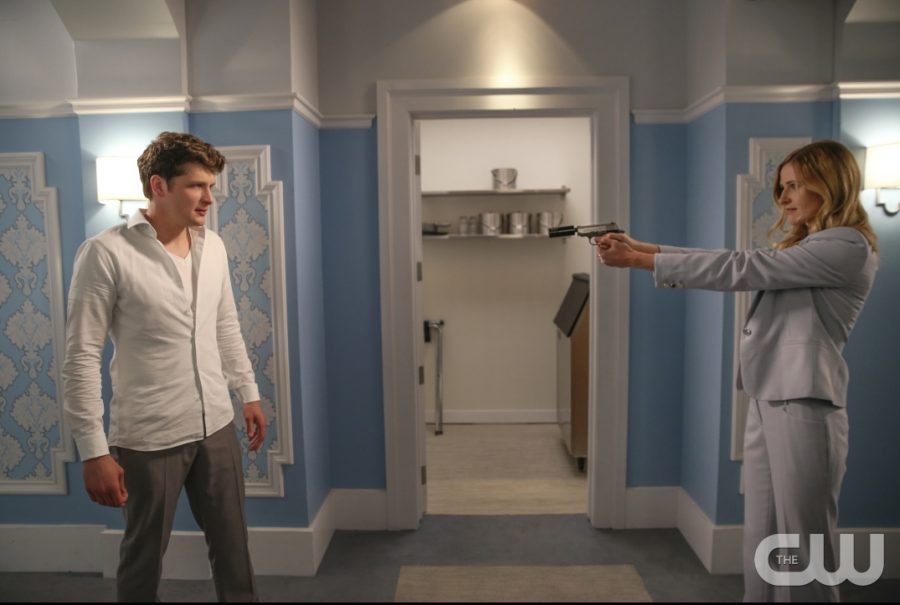 Michael Cordero (Brett Dier) finds out that his fellow cop has been working against him throughout the season in the season two finale of "Jane the Virgin." The season three premiere opens with Jane facing the aftermath of this scene.

One police officer’s fight for life. An evil twin’s mission to usurp the life of her sister. The first meeting of a now-newlywed couple.  Somehow, the CW’s “Jane the Virgin” manages to successfully integrate all of these plotlines, along with emotional baggage galore, into its season three premiere.

The show’s initial premise was of Jane (Gina Rodriguez) becoming accidentally artificially inseminated with the baby of rich hotel owner Rafael Solano (Justin Baldoni).  Since then, it has incorporated a host of lovable and not-so-lovable characters into a consistently captivating narrative.  The first episode of its third season was no exception.

The overall arc of the episode itself is extremely sad – and it’s supposed to be.  The night of his marriage to Jane, Michael (Brett Dier) is shot point-blank by crime lord Sin Rostro (Bridget Regan), who has been masquerading as his police partner for almost a season.  Jane finds him, helps rush him to the hospital and struggles to stay calm in a situation that is anything but.  Gina Rodriguez’s performance in this episode is simply phenomenal, poignantly capturing the breadth of Jane’s feelings – worry for her husband’s life, uncertainty when a key medical decision is put into her hands and just pure grief.  When Jane holds her emotions in long enough to step away from her family, then lets them out in wracking sobs when she’s finally alone, it’s impossible not to choke back some tears of our own.

But what really made this episode one of the show’s best was its use of other storylines to supplement the main arc.  In this episode, we also learn about one of Jane and Michael’s first encounters – namely, how Jane worked through a “love triangle” between Michael and long-time crush Sam (Miles Gaston Villanueva).  When Michael pulls Sam’s car over while he is on a date with Jane, effectively busting her, it’s hard not to stifle a laugh.  The juxtaposition of this storyline with the heart-wrenching hospital narrative occurring simultaneously is one that wouldn’t work on any show other than this show.  “Jane the Virgin” ties intense grief, light-hearted humor and tender love all into one episode, and does it brilliantly.

There are a myriad of plotlines just waiting to be explored in season three of “Jane the Virgin,” and its stellar premiere sets up a promising outlook for just about all of them.  If anything, the episode is a reminder of just how unique this show is – there is always another plot twist lurking just around the corner.