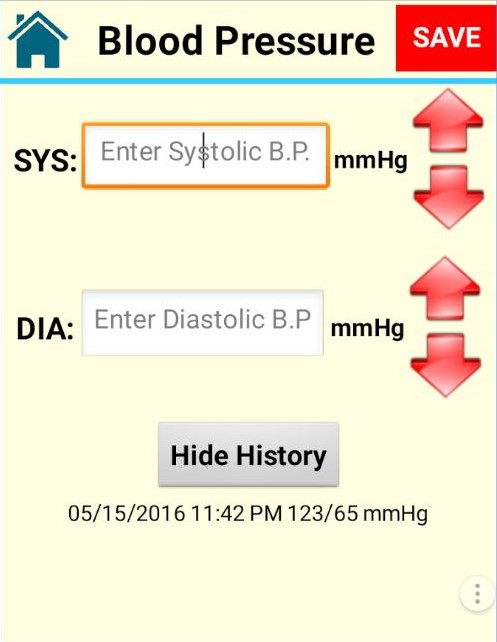 Photo courtesy of Rohan Taneja. The HeartScribe app features 6 easy-to-use buttons, voice recognition, automatic recording, and a text-to-speech feature. The app is currently available on Google Play and will soon be available on the App Store.

HeartScribe is an app that allows to users to log information about symptoms, blood pressure and weight. This information can then be sent to medical practitioners as well as caregivers, who also play a role in looking over a patient’s health data. Senior Rohan Taneja started developing the app in March after his grandfather was diagnosed with heart failure, and his main goal for the app was to make sure it could be utilized by users of all ages. In order to learn more about the app, tjTODAY interviewed Taneja about it and the process behind creating it.

Q: Do you mind telling me a little more about your grandfather, who inspired you to create the app?

A: Two years ago he had heart failure, so he started saying home a lot more, and he looked a lot worse and he had to go to the hospital very frequently. A year ago I started to get involved in his treatment so I saw the types of notes he was taking. He had to record his blood pressure, his symptoms, his blood sugar levels, and other data. He would write it himself, and it was kind of messy because he was really weak and couldn’t write legibly, so I figured his doctor couldn’t read it because I myself couldn’t read it. In January I had the idea of an electronic way of recording this data. He passed away in March but he got to see the app before that, and he did like it, and I just want to help other people.

Q: How long did it take to develop the app?

A: It took around three months. I was new to programming when I started so it took me a few hours every day, but that’s just because I was learning the language. I think coding an app like that now would take me around three weeks.

Q: Did you work with someone to create this app, or did someone guide you throughout the process?

A: My dad motivated me to work on it, but he himself didn’t know how to work on it. My parents gave me motivation, but I had to learn how to do it myself.

Q: What exactly do you want people to get out of this app?

A: I think it’s just important that people tell their grandparents and their parents that they can get involved with technology, because the big thing with apps these days is that they’re mostly aimed towards younger populations, and the fact is that technology can help everyone. So if you develop technology for seniors, you can use the things we’re using nowadays to help them, and they’re usually the ones who have the worst chronic conditions, so I think it’s just important to get them more involved with technology.

Q: When are you planning on making it available on the App Store and online?

A: It’s actually available on Google Play right now, and I’m working on the Apple version right now, which should be available in January.

Q: What do you think is something unique about your app that similar apps may not have?

There’s a few other apps on the app store that are made for people who have diabetes or blood pressure problems, but they only record only blood pressure or only glucose, they don’t record everything that is involved in heart failure. My app is more catered towards people who have heart failure. The biggest thing is that other apps are usually made for people who are 30 or 40 at most, but parents can’t figure out how to use them because they have tons of buttons and complicated graphs, and they’re not made for people who are 70 or 80 who actually have these conditions. HeartScribe is extremely simple and it only has six big buttons, and it’s catered towards seniors who can use it without assistance, so it kind of empowers them.

Q: What do you suggest someone do if they want to create their own app?

You just need YouTube and a drive. You also have to care about what you’re working on. With this app I didn’t care enough to make it until my grandfather’s condition got really bad. That’s when I realized that it was worth spending several hours a week working on it, so you just have to be passionate about it, and you have to be willing to be patient with learning the process.

Q: What’s something you got out of this experience that you really enjoyed?

I got to visit senior citizen centers after the app came out, and I became more aware of how widespread of a problem heart failure and other chronic diseases are in America. Several people in the county alone have some of these diseases, so it made me a lot more aware. It also took a lot of patience because when I first went to a senior center, a lot of the people there couldn’t use the app until I made adjustments, so making an app as simple as possible is the only way you can get senior citizens involved.

A: Can you please tell me a little more about visiting senior centers?

I think it was about June when I started visiting senior centers, and the purpose of that was so that I could see how the app had to be modified, and also so I could get input about what they thought about the app, and if they were able to use it. I also wanted to get feedback about the app from people who had Android phones who could get download it and start using it. That was pretty successful and I got a lot of people to start using the app by just visiting the centers. Also, that’s where I got the advice to make the buttons bigger and just make the app more simple in general.

A: Are you planning on doing anything to raise awareness about the app?

News about the app was published in the Fairfax Times, and I’m pretty sure that should help a lot with getting the word out to seniors. If I also get out information out about my website, I think more seniors will be able to see it and find out what it’s about it. In the future I want to email app review websites or probably get the information to more newspapers.