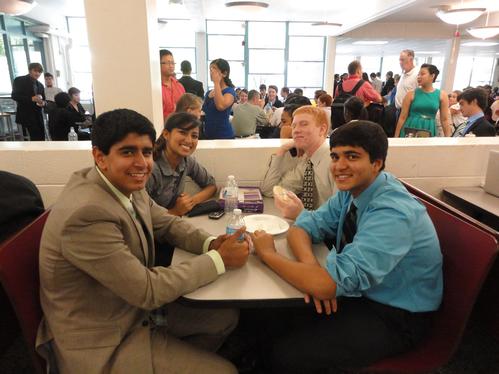 The debate and forensics teams got off to a head start for the year with the Wake Forest National Early Bird tournament. Though their eighth period meetings and local debate tournaments haven’t started yet, many students took time on their own to get together and prepare for the competition.

From Sept. 7-9, 16 students attended the tournament in Winston-Salem, N.C. They participated in individual speech competitions and Policy, Lincoln-Douglas and Public Forum debate, so that Jefferson was represented in all categories of the tournament.

Senior Romita Mandal started participating in forensics last year, and Wake Forest was her first national tournament competing in speech competitions rather than debate. Mandal competed in extemporaneous speaking, which is an individual event.

“Because the tournament is structured around current events and speaking with little preparation, practice really is the only way to prepare,” senior Romita Mandal said.

“More than anything, it was a learning experience for me,” Mandal said. “I worked hard to perfect my speech techniques and it reflected in my performance.”

Some students are already looking forward to another national tournament. From Sept. 21-23, juniors Nathan Dass, Adam Friedman and Vashali Jain and sophomores Siddarth Anand and Ruhee Shah will be attending the Yale Invitational Tournament.