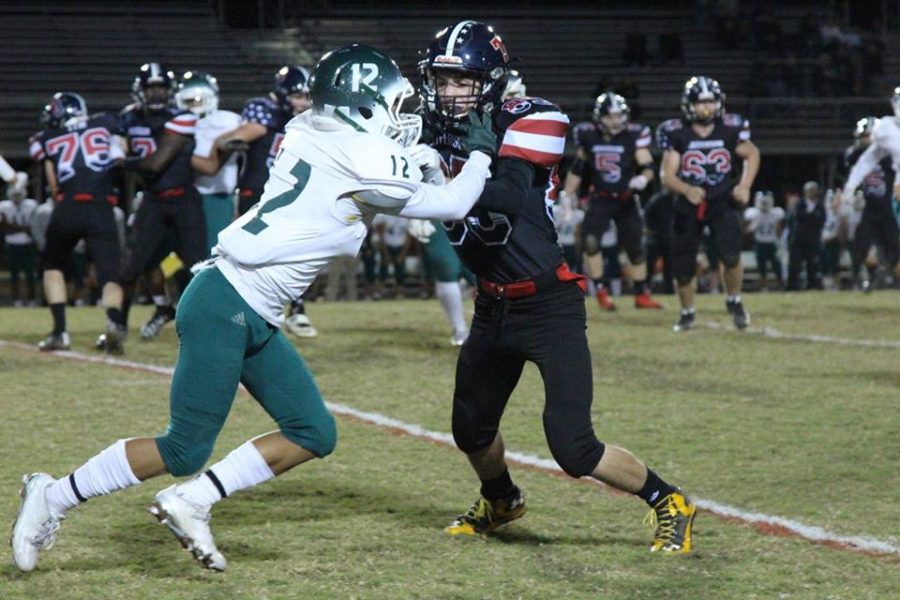 Jefferson’s varsity football team suffered a 0-48 conference loss to Falls Church High School in their annual homecoming game on Oct. 14. The Colonials returned to Evans Stadium after a bye week and a road loss at Stuart High School, amped up and ready to play after receiving a tremendous display of support at each of the two pep rallies that occurred just hours before the game.

The team took the field in front of a student section packed with hundreds of Jefferson fans while debuting their new black uniforms that were ordered specifically for the game on Friday. The momentum created by the deafening cheers coming from the stands carried into the start of the game for the Colonials, who started things off by recovering an onside kick after the ball bounced off of a Falls Church player.

However, things quickly turned downhill as the offense was charged with an illegal shift penalty and turned the ball over on downs after senior quarterback Jack Boyle was unable to complete a pass on fourth down against an aggressive Falls Church defense.

From there, Falls Church immediately ran the football back 75 yards for a touchdown on their first offensive play of the game. However, the Jaguars weren’t finished yet and piled on another four touchdowns before the first half ended and scored another two in the second half. Falls Church junior quarterback Luke Saia and sophomore running back Dakwandre Marshall each ran for multiple touchdowns in the game. The Jaguar defense stifled Jefferson as well, limiting them to only a handful of first downs and never allowing the Colonials to score a point.

However, Falls Church struggled with penalties and had three touchdowns revoked due to illegal moves by the offense, including a holding call and an illegal number of players on the field.

Several Jefferson players also went down with injuries varying in degree, all in the second half. Senior captains Steven Rehard and Yadeen Rashid both successfully reentered the game, but senior lineman Matthew Heninger and junior running back/linebacker Danny McCray were both ruled out for the rest of the night.

Friday was Jefferson’s third shutout loss of the season, as well as their third conference loss. The game was also Falls Church’s fifth consecutive win after opening the season with two losses. The Jaguars now lead the Capitol Conference with an undefeated 4-0 conference record and an overall 5-2 record as they head into the final three games of their season.

Meanwhile, the Colonials look to win their first game as they prepare for two road games at Lee and Wakefield High Schools before coming home to play against Marshall in the season finale. Jefferson’s record is now 0-6 and they occupy the last-place spot in the conference.