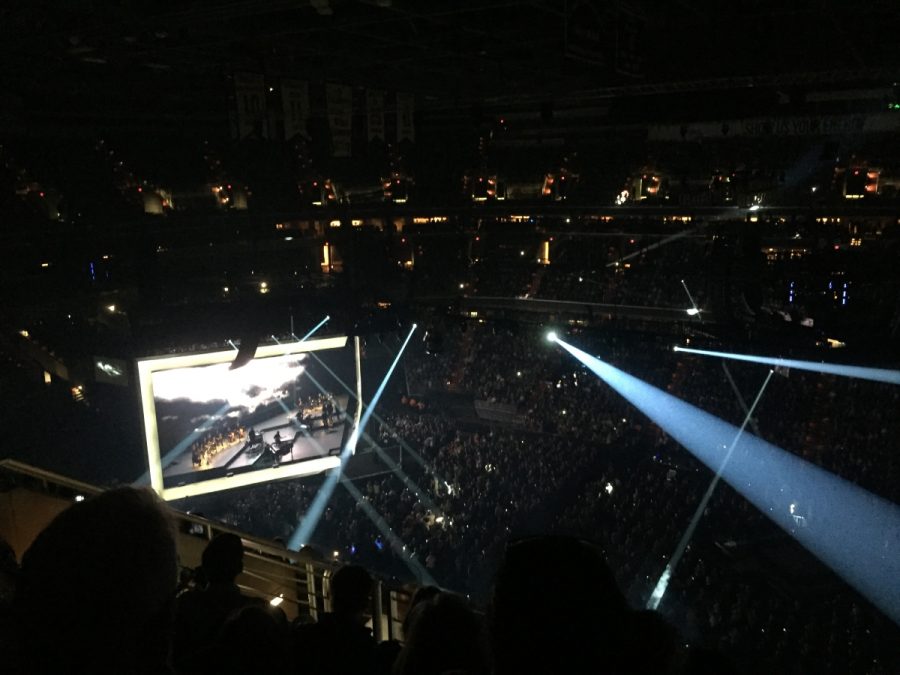 Adele performed in the Verizon Center on Oct. 11 at 8p.m. Her performance of "Skyfall" featured spotlights sweeping over the crowd for a mysterious atmosphere akin to that of the movie.

Admittedly, I had been waiting for the date to arrive since the moment I first booked my tickets six months prior.  Seeing Adele in concert has been one of my biggest dreams since “Hello,” and it finally became a reality at the Verizon Center on Oct. 11.  Yes, I saw Adele live – and it was more than just a performance.  It was an experience.

Adele’s voice is phenomenal.  Hearing it in a music video or through a television screen is one thing, but hearing it in person is another entirely.  She commands the stage with an enrapturing presence, and it’s clear that she puts her whole heart into every note she sings.  She shows off her immense vocal range in songs like “When We Were Young,” adds a hint of attitude and flair with “Send My Love (To Your New Lover)” and gets raw and raspy in “Set Fire to the Rain” – all in the span of two hours.  Her ability to master a myriad of vocal techniques and combine them with a sincere delivery left me, along with the rest of the Verizon Center, speechless.

But perhaps what surprised me the most from the concert was the realization that Adele is more than just a singer – she’s human, too.  In between songs, she took the time to talk to her audience, asking us how we were feeling and if we were liking the show so far.  She candidly joked about the struggles of maintaining her balance on a stool during the acoustic section of the concert, then gushed about stalking her favorite singers on Google.  I was one of thousands of attendees at the concert, but the night still felt very personal.  I came away feeling not only blown away by Adele’s voice, but also her ability to connect with people just by being who she is.  Even though it’s been a few days since I packed myself into an auditorium of thousands and sang along to all of my favorite songs, I can’t help but relive moments from the concert in my head over and over again because I don’t want to forget a second.

I first fell in love with Adele after hearing “Rolling in the Deep,” and haven’t looked back since.  Hearing Adele sing live in concert took me back to that very first moment.  It reminded me what I love so much about Adele and her songs – that while her command of her voice is stunning, it’s her ability to bring listeners together that truly makes her special.

Oh, Adele.  I doubt we’ll ever find someone like you.