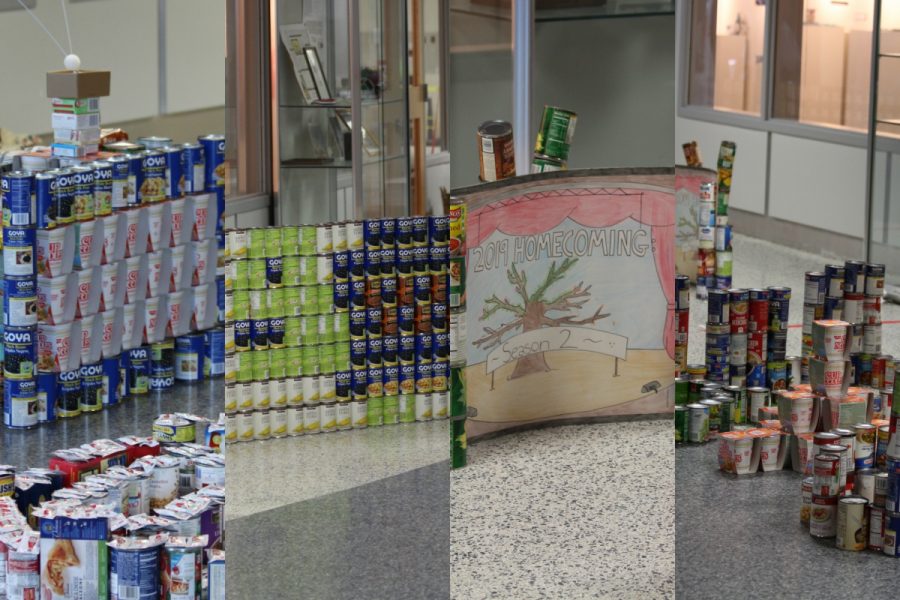 15 students from each class convened in front of the art gallery during lunch on Oct. 11 to depict their class’s homecoming theme by creating sculptures made out of canned food that will later be donated to charity.

The seniors, for their final homecoming at Jefferson, built a TV set surrounded by popular characters’ logos, for their theme “Fandom Frenzy.”

“Me and my partner heading the event, Pranavi Nara, started planning in August 2016,” senior Sean Tran said. “It was quite difficult to come up with the design, as our theme is quite broad, but we were happy with what we came up with.”

The freshmen’s homecoming theme is “Beauty and the Beast”, and their sculpture consisted of cans arranged to form two “Bs”.

“One of them was supposed to be very pristine looking and perfect to represent beauty, Belle, and the other is very not-perfect, like we had a bunch of pasta boxes and [it was] very uneven and that’s to represent Beast,” freshman Lucas Bronstein said.

Meanwhile, the sophomores created a TV playing a title card for a television show, following the theme “Seasonal Switchup.” While most classes gathered cans and boxes of nonperishable food items by directly asking for cans, but the juniors collected money donations to purchase cans for the sculpture.

“We decided on making an image of a turtle, it’s a land and sea animal and land and sea is our theme,” junior Nicholas Begotka said. “We decided to do that because when creating the image you need a specific number or each color of cans.”

Though this may have given the juniors a slight advantage in assembling the cans, other students are not concerned by it.

“We have always asked the class for canned food donations, and it has worked for the past two years I have led it. It makes the process feel more personal,” Tran said. “But, it’s not something to worry about. It all goes to charity, so if you get more cans, why not?”

As many students conjectured, the seniors won the sculpture contest, and won 300 points. The juniors, freshmen and sophomores were awarded 250, 200 and 150 points respectively.