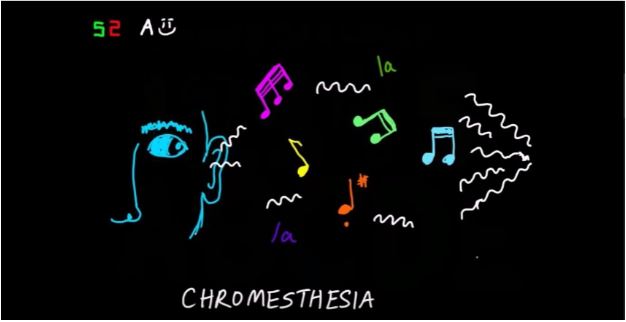 Photo courtesy of Akshay Balaji and brainfacts.org. Balaji’s video, “Hearing Red, Tasting Blue: When the Senses Mix” discusses the topic of synesthesia. Synesthesia is a neurological phenomenon in which using one sense can trigger the use of another.

Senior Akshay Balaji won first place in the Brain Awareness Video Contest, an annual contest hosted by the Society for Neuroscience (SfN). The purpose of the contest is to explain a topic in the subject of neuroscience that a broad audience can understand. In order to enter in the contest, participants must work with a member of the SfN to produce and sponsor the video. Along with winning $1000 in prize money, Balaji also won a trip to this year’s SfN meeting in San Diego. tjTODAY interviewed Balaji in order to learn more about the contest and his video.

Q: Could you please tell me a little bit about the contest?

A: The Brain Awareness Video Contest contest was hosted by The Society for Neuroscience, and the idea is that anyone can make a five minute video on any topic in neuroscience. It can be related to the brain, related to sensation, all sorts of things. For the contest you had to contact a mentor, who had to be someone in the Society for Neuroscience. I got in touch with someone from Georgetown University, and she helped me brainstorm a few ideas and submit the video.

Q: Could you please tell me a little bit about your video in particular?

A: My video was on synesthesia, which is when one sense in your brain gets mixed with another sense. So you might hear a certain color, or you might see words and letters as different colors than what they actually are, and it varies from person to person. I found out about it because I had done the Brain Bee through TJ, and when they advertised it over there, I thought ‘Why not try this out?’. It was due in June, so I spent a month or two starting in March working on it. I hadn’t really seen any previous high school winners, so I thought, ‘Okay, let’s see how I do even though I’m in high school’. The previous winners were graduate students or professionals in the field who were also using pretty advanced video software that I didn’t have access to because that’s not something I’m very experienced in. I kept my video low-budget by using my phone camera, and I drew pictures using the same software Khan Academy uses. I used pictures to show exactly what I was talking about in the video, and that’s how the entire thing was put together.

Q: Since there weren’t any previous high school winners, how did you feel after winning?

A: I was actually really surprised because I didn’t expect to win against someone who had access to more sophisticated software. But it felt really good and what I understood from winning was that I won not because I had the best software or it looked aesthetically the best, but because my  message and the way I taught the subject was clear and concise, it made sense, and it was something the public could grasp. I also included mini-tests in my video that viewers could participate in, which was something that would keep them engaged.

Q: How do you plan on continuing your passion for neuroscience?

A: I am planning on maybe studying neuroscience or neurology in college, and I do want to go into the field of medicine. I’m also a mentorship student right now and I’m doing neuroscience research at Georgetown, so that’s one way I’m carrying it throughout this year.

Q: What advice do you have for someone who is interested in neuroscience and would like to participate in this contest?

A: If you have an interest in neuroscience, there are tons of opportunities out there. I’d say reading and staying up-to-date with current research and getting in touch with the Society for Neuroscience is a great way to get started. If you’re an  underclassmen, consider summer research opportunities at universities or NIH (National Institute of Health). We also have Dr. Locklear and Mr. Hannum who run the lab here at TJ, so it would be a good idea to talk to them, too. If you want to enter in the contest, they’ll have it again next June, so you can start planning now.