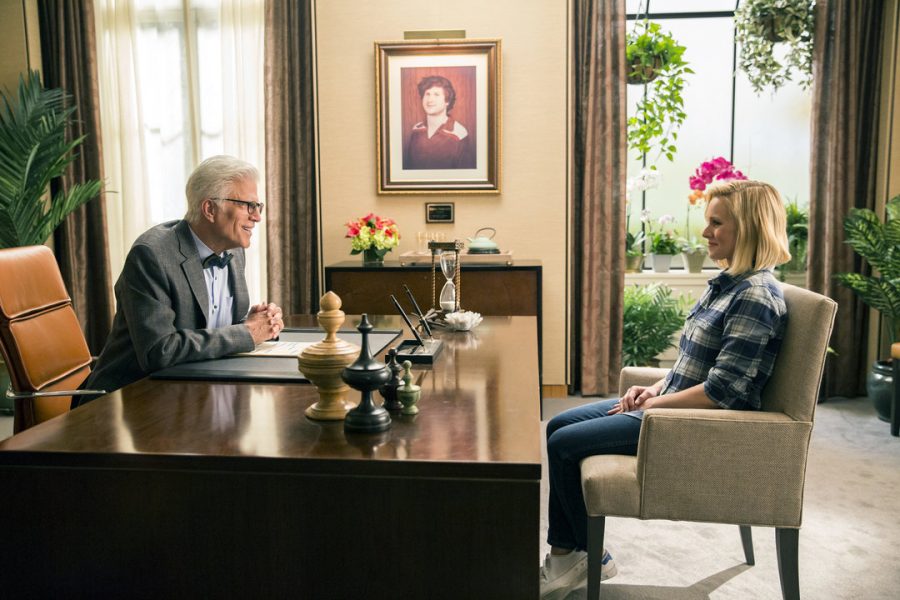 Michael explains the Good Place to Eleanor in the pilot episode.

It’s fair to say that a most, or at least a lot of us, saw commercials for a show called “The Good Place” while watching the Olympics this August. A comedy about the afterlife seemed interesting, and I knew I liked the shows that the creator Michael Schur had previously worked on, including “Parks and Recreation”.

As summarized in the latest print issue of tjTODAY, the comedy follows Eleanor Shellstrop (Kristen Bell), a woman with questionable morals who learns from Michael (Ted Danson) that she has died. Eleanor now lives in the Good Place, where everyone gets along and everything has a positive energy about it. Eleanor knows she doesn’t belong in the Good Place, but tries learning to be a better person. The first two episodes of “The Good Place” premiered on Sept. 19, with the third episode airing on its “regular” weekday on Sept. 22.

The first two episodes set up the tone for the show well, with its vibrant color palette, charming set design and light-hearted dialogue. There are some amusing details, too, such as Eleanor pointing out that the town square has many frozen yogurt shops, and Michael replies, “that’s the one thing we put in all the neighborhoods, people love frozen yogurt.”

Eleanor also meets her assigned “soul mate”, Chidi (William Jackson Harper), a former ethics professor, and her neighbors Tahani (Jameela Jamil) and Jianyu (Manny Jacinto). Though the show is only beginning, her relationship with Chidi could go in an interesting direction, especially since he is torn between doing the “right thing”, which is to report Eleanor as being mistakenly put in the Good Place, and helping her be a better person. The characters’ interactions themselves can come off as cheesy, but I think I can get used to it.

The show plot also reveals some of the Good Place’s flaws, as Eleanor’s initially negative attitude causes some damage to her neighborhood. Other questions arise when Eleanor also discovers that she is not the only person who should not be in the Good Place. This aspect is clever, since a lot of stories I have read or watched in the past have had a dark or serious tone when revealing systematic flaws. However, “The Good Place” refreshingly does this as a comedy.

One part of the show that I don’t enjoy so much are Eleanor’s flashbacks to times when she was alive. Much of her character is written like a typical “bad” person, drinking to avoid being the designated driver, being apathetic of the environment, so on and so forth.

Despite this, “The Good Place” seems to be going in an engaging direction. I am excited to see the upcoming episodes, and hope the plot continues to twist and turn.