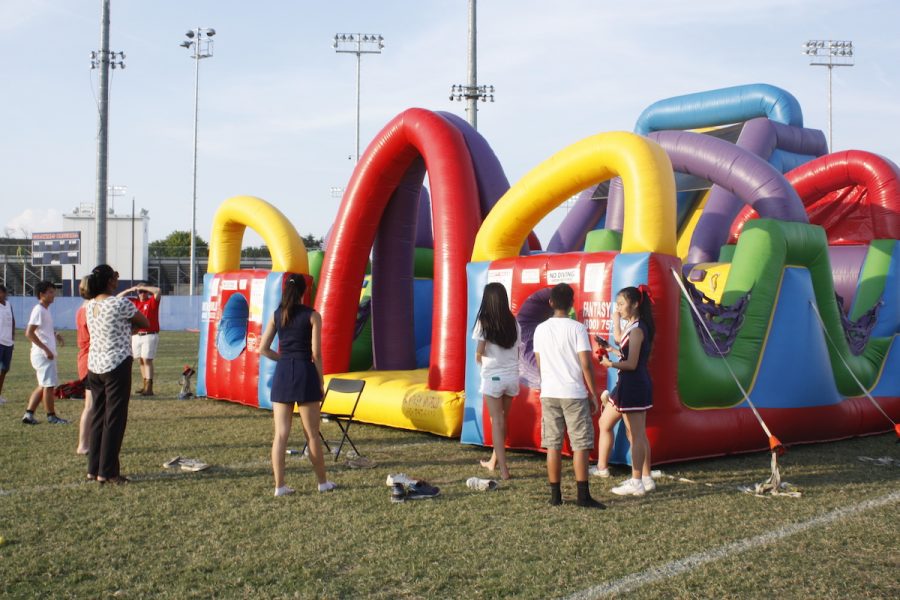 Students gather around the bounce house at the Back to School Bash, held on Sept. 9.

The baseball field was filled with hundreds of students as they spent the conclusion of the first week of classes at the Back to School Bash, and later, the varsity football game against Richard Wright PCS on Sept. 9.

Organized by the Parent, Teacher, Student Association (PTSA) with assistance from the Student Government Association (SGA) and Student Services, the event consisted of various food vendors and amusements.

The PTSA also set up games, such as an obstacle course and giant Jenga. In addition, student-run clubs and organizations, such as the cheer team, held activities and sold food.

“[The PTSA organized] mini-games like basketball,” senior and SGA president Tim Cho said. “The field was open to sports like football, soccer and Frisbee.”

Planning for the Back to School bash began at the end of the the previous school year, but the majority of arrangements took place towards the end of summer break, where the SGA also helped.

“PTSA began planning much earlier than SGA as they decided the venue, activities, and organized the food,” Cho said. “Anubhava Watal, our student DJ, played music with a smoke machine.”

The weather was much warmer than last year’s Back to School Bash, so the PTSA provided water to attending students.

“The PTSA gave away free water this year because it was so hot,” Strikis said. “We wanted to make sure that no one got dehydrated.”

The event concluded in time for the football game against Richard Wright PCS, where the Thomas Jefferson Marching Colonials and dance team performed during halftime.

“We hope that supporting TJ athletes, musicians, artists and other competitors will become a habit for everyone at the school for the rest of the year, starting with the Back to School Bash,” Strikis said.