When in London: London Eye 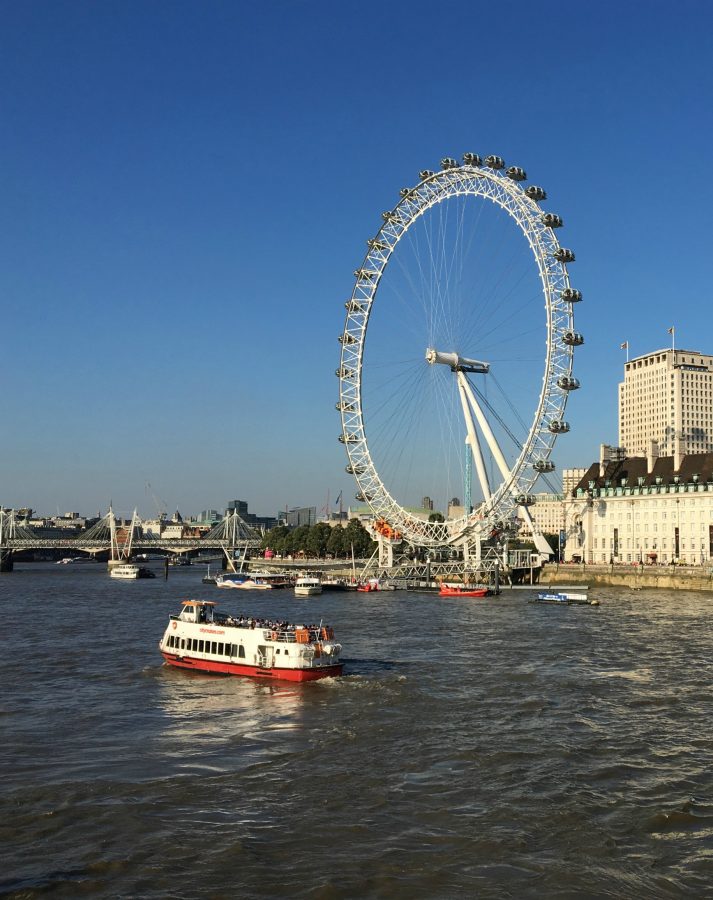 The London Eye overlooks the Thames River. Less than ten years ago, this was the tallest ferris wheel in the world.

Recently my family took a trip to London. We were only there for three days so we made it our mission to find the best things to do in an effort to make the best of every minute. In this series of blog posts I share some of my favorite places we went to, and this entry is on the London Eye.

The London Eye itself is a sight to see. With its height over 440 feet, it was the tallest ferris wheel in the world when in was built in 1999. Although it is technically a ferris wheel, in my opinion that name does not do it justice. A ferris wheel usually fits about four to eight people, and in most cases requires you to sit. Each of the London Eye’s thirty-two capsules can carry up to twenty-five people and allows plenty of room to move and walk around.

For those who wished to sit, there is also a bench that we could lounge on. I greatly appreciated this because I was tired of walking around the city so much. However, I eventually stood up in order to get the best views of the city and to take pictures.

The eye was definitely one of the best places to take pictures of London. You could see so far out into the city, it was beautiful. The ride was also so smooth and moved quite slowly so I did not have to worry about the movement of the capsule making my pictures blurry. There was also a place where we had our picture taken within the capsule.We just had to stand in a certain spot and hold our smiles for a while, and at the end of the ride they showed us our picture to buy.

Now I can imagine that some people may want to pass on visiting the London Eye because of a fear of heights. And while I am not personally afraid of heights, I know two people who are but still went on the eye and said it was definitely worth it. One thing I think is a little comforting is that the capsule is completely enclosed, there are no openings. Most of the capsule is glass, which may be a little frightening, however the bottom is solid white so if you ever got scared looking at the floor may be helpful because you cannot tell how high up you are.

What I thought was most impressive was how high tech the London Eye was. As I mentioned earlier they had a camera that could take your picture inside the capsule. They also had a second camera that took a picture from outside the capsule while you were coming down to exit. The capsule was also equipped with tablets which let you know what you were looking at each direction. I also appreciated that they had air conditioning, although to me weather in England was much better than the summer here in the U.S.

Overall, I think the London Eye is something that will be greatly enjoyed by anyone who can appreciate a good view. The look you get at the city is amazing and it also helps you get a sense of where things are and in which direction. I would especially recommend doing this after you have done a lot of walking around, because it is a nice way to relax a bit and cool off.