When in London: The London Dungeon 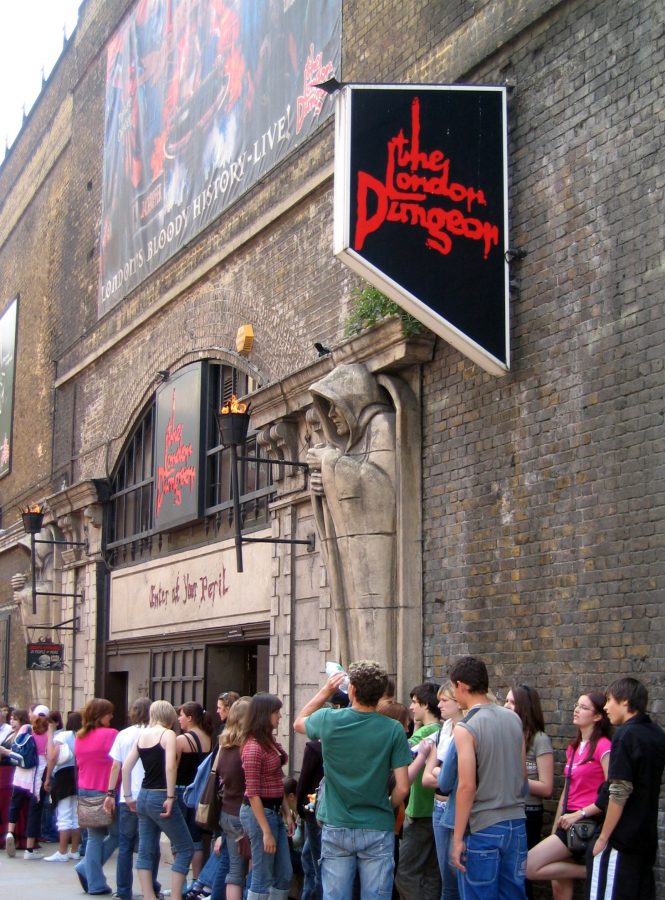 Tourists wait in line for an opportunity to experience the London Dungeon.

Recently my family took a trip to London. We were only there for three days so we made it our mission to find the best things to do in an effort to make the best of every minute. In this series of blog posts I will share some of my favorite places we went to, starting with, the London Dungeon.

The London Dungeon was a fun and unforgettable experience. It was like watching a play, taking a history listen, visiting a museum, and going to an amusement park, all in one.

It started with a large line packed with other tourists, most of them sweaty and uncomfortably close, but long lines are a part of anything worth seeing. They did make an effort to make the wait a little fun by including some spooky effects, such as doors which shook or voices screaming every couple minutes. And when we came close to the end of the line they let us take some pictures in front of a green screen which made it look like we were being executed. They also had a large cage of rats for us to look at, which was a bit disturbing. However, all these creepy things did help prepare us for the freaky activities ahead.

The main idea of the activity was to make us feel like we were traitors in London’s previous days, which meant we were on our way to being hung. They had various activities leading to our “hanging”, including rides to show how the prisoners were treated. They also incorporated many of the major events in London’s history into the experience. We had to evacuate when the Great Fire of London reached, met Ms. Lovett and got a peek at her pie’s secret ingredient (she bakes people, it is a little gross), and even got to flee from Jack the Ripper.

As a roller coaster lover, the rides were probably my favorite part. Now let me be clear, the rides were nowhere near the level of those in an actual amusement park, but they were still quite fun. Despite being short and slow, the focus on the effects and props used to scare is what made the rides thrilling and suspenseful. The best ride in my opinion was the one at the end of the entire dungeon experience. In this one, our “hanging” was simulated with a thirty foot drop tower, which did a pretty good job of making it look like we were in the gallows.

Another major part of the fun was seeing the employees in full out costumes. They did a superb acting job, and having them stay in character really helped make the experience feel real. They also gave us some laughs by picking on people in the audience, and often making crude (but funny) jokes.

Personally, I did not know a lot about London’s history, so this was a fun a way for me to learn more about the city. I think the London Dungeon is most enjoyed by children and teens, but adults seemed to enjoy it quite a bit too. I strongly recommend doing this activity if you are visiting London, especially if you are with a group of people.