Hiking on the Loudoun Heights trail at Harper’s Ferry 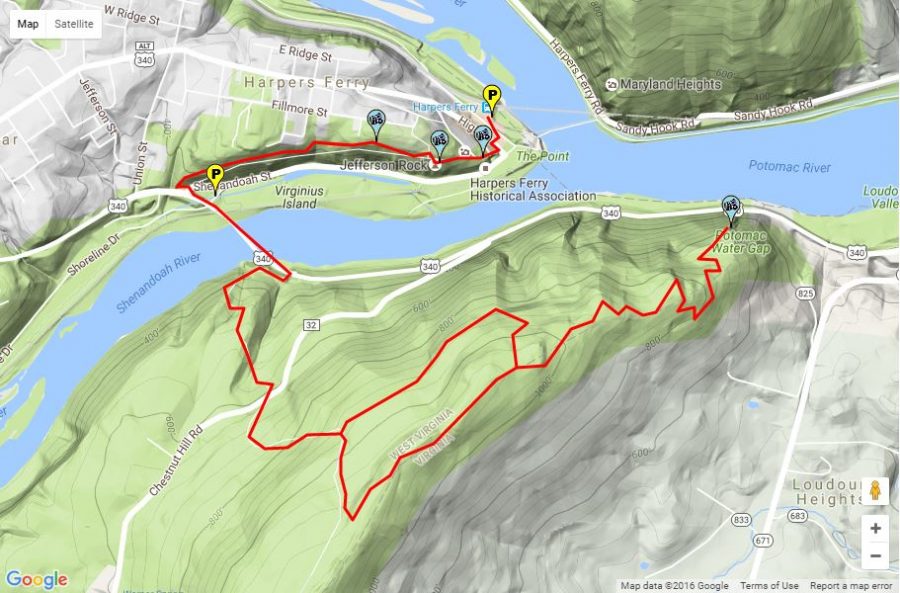 Photo courtesy of hikingupward.com. The picture above shows a trace of the trail on Google Maps. The circle near the middle of the trail shows where you have a choice to go either left or right, the right trail being slightly more difficult than the one on the left.

The trails at Harper’s Ferry are ranked on a scale of one to three on their difficulty, one being easy and three being difficult. Loudoun Heights has a rank of three, and parts of the trail require hiking through the town itself. Though the Loudoun Heights trail is considered difficult, I found I pushed myself more when I hiked both Loudoun Heights and Maryland Heights on the same day, which took me around eight hours. However, for this blog post I’ll only be focusing on Loudoun Heights because it is more difficult out of the two.

Loudoun Heights is a 7.5 mile round trip, and takes between three and five hours to complete depending on how fast you go. I was walking at a brisk pace with around eight pounds on my back, and I was able to complete the round trip in four hours, not including breaks and the time I spent admiring the view at the top of the trail.

The trail has an elevation change of around 900 feet, and at the top you have a nice view of the town and the Potomac River. It’s also slightly less crowded than the other trails at Harper’s Ferry. Since I went early in the morning, around six, I encountered nobody else on the trail. However, this could also have been because it was a weekday, because Harper’s Ferry is much more crowded on weekends.

The uphills on the trail only lasted a few minutes, and the trail was not very steep. To challenge myself, I tried running during the uphill portions, and I was definitely out of breath by the time the trail would become flat again. Going downhill was slightly tricky because the trail has large rocks. I tripped once while trying to go down, and I hit my toes against my hiking boots many times. However, it’s not very hard on the knees.

Before you reach the top of the trail, you come across a meadow which is in a clearing that has large power lines. You can choose to end your hike here, or continue to the end of the trail where you’ll see the view of the town. The distance from the beginning of the trail to this meadow is approximately 3 miles, and if you return from there, you’re round-trip distance will be around 6 miles, and should take around three to three and a half hours.

One of my favorite parts of the trail was crossing a bridge along the Potomac River. It’s a little scary because it’s right next to a highway, but there are large dividers separating you from the cars. This bridge lets you get a really nice view of the river, and it’s since it’s near the beginning of the trail, it’s nice to see it when you’re coming back because you know you’re close to the end of the hike.
Overall the hike was very fun. It was more fun than difficult, which makes it a good trail if you’re a beginner to hiking or if you want to have fun rather than really push yourself on a trail.