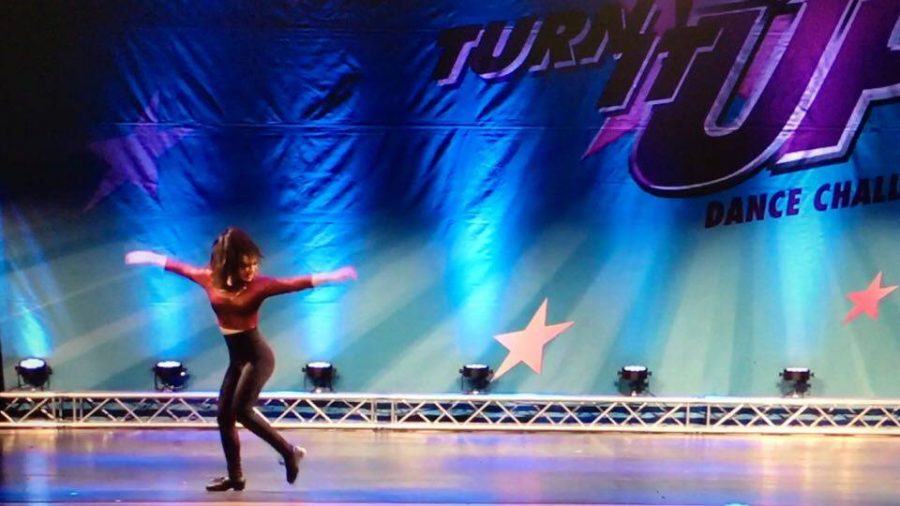 Rising junior Katherine Barbano performs a dance for her solo tap routine. Barbano’s routine was choreographed by Lee Raney, a choreographer from KLR Studios for Dance and Music, and her routine was called “The Build”.

The Turn It Up Dance Challenge! is a producer of dance challenges and competitions whose mission is to provide opportunities for dancers to progress in future dance careers, and provides dancers with a professional venue to compete with top dance studios and learn from professionals who have experience with dancing. Judges of the competitions are experts in the field of dance, and many have performed in professional events and appearances. This year rising junior Katherine Barbano competed against 115 other participants in her category at the competition.

“This year I decided to try competition dance instead of solely performance, and nationals was the culmination of all the regional competitions our team had had this year,” Barbano said.

“I was actually so shocked that I almost didn’t go up to get the award and some of my friends had to push me up to the front of the stage. The competition was really tough and I honestly didn’t think I stood a chance against many of the other dances, especially since it encompassed all the senior amd teen solos rather than just my category of tap,” Barbano said.

While dancing or performing, Barbano tries to focus on the emotions she has to convey through her dance.

“While I perform, I try to really get into the music and choreography by considering what emotions the music invokes and drawing from my past experiences to broadcast those emotions to the audience,” Barbano said. “For example, if the song is happy, I think about something funny one of my friends said so that my smile will look more natural. I also think onstage about advice my instructors give me on my technique.”

Aside from winning multiple awards, Barbano was also selected to be on the 2016 Turn It Up National Dance Team.

“When I found out this year that I had been selected I was very surprised – I didn’t expect it at all because there are so many other talented dancers,” Barbano said.

By participating in the competition, Barbano was able to learn more about dance, which also helps her in school.

“[Dance has] helped me considerably with time management for my activities and homework,” Barbano said. “In addition, it has served me well in the TJ community particularly in dancing and choreographing for the freshman MEX performance and iNite. It has also helped me meet a lot of new people – I met some of my best friends through dance.”

Though she focuses on tap at her studio, being on the Jefferson Dance Team has helped Barbano reinforce skills in different types of dance.

“TJ Dance Team has been a great experience for many reasons. First, it has introduced me to a group of wonderful people who share the same interest as me, and it is awesome to share a camaraderie with the team,” Barbano said. “Secondly, it has strengthened my skills in many styles of dance I had not focused much on previously, like lyrical or pom, because I do mostly tap dance at my studio.”

Barbano stresses that the most important part about dancing is to have fun.
“Dancing well takes practice. Nothing ever comes easy, and you have to be willing to put in the time and effort to perfect technique. However, overall the most important thing to remember is to have fun. It’s impossible to stress enough the importance of performance, because energy and facials are what truly entertain an audience,” Barbano said.