“The Cursed Child” is a magical mishap 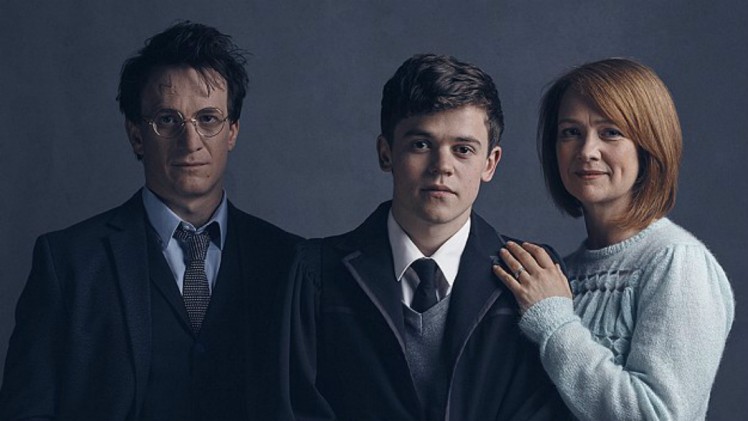 Jamie Parker, Sam Clemmett, and Poppy Miller star in "The Cursed Child," the eighth installment in the Harry Potter series. The Palace Theatre is currently showing the play in two parts, as the nature of the story was too complex to shorten it to one.

A lightning-bolt scar.  Platform nine and three-quarters.  The Boy Who Lived.

J.K. Rowling revolutionized literature when she introduced readers to Harry Potter and his adventures through Hogwarts School of Witchcraft and Wizardry.  In the final installment of the series, the story ended with Harry, Ron and Hermione sending their children off to Hogwarts, their escapades over.  But now, the Chosen One’s narrative picks up right where the seventh book left off in the play “Harry Potter and the Cursed Child,” currently playing at the Palace Theatre in London.  The play is written by Jack Thorne, John Tiffany and J.K. Rowling.

“The Cursed Child” focuses mainly on Albus Severus Potter (Sam Clemmett), the son of Harry (Jamie Parker) and Ginny (Poppy Miller).  Albus is struggling growing up in the shadow of his father, especially after he is sorted into Slytherin and befriends Scorpius Malfoy (Anthony Boyle), the son of Harry’s childhood enemy Draco (Alex Price).  When Albus overhears his father discussing the discovery of another Time Turner, he encourages Scorpius into a magical misadventure to bring Cedric Diggory back from the dead.  Events eventually get out of hand, as they often do, and Albus and Scorpius must patch the fabric of time together before the world as they know it ceases to exist.

The book is, essentially, the script of the play, so reading it was definitely a different experience than reading a traditional book, much less a Harry Potter one.  But even setting that aside, this book just didn’t do it for me.

What went wrong?  My opinion may be heavily biased purely based on the fact that I am a diehard Harry Potter fan, and therefore had exceedingly high expectations for the “eighth installment.”  “The Cursed Child” is meant to be a play, and I am judging it by only what I see on paper.  However, what I felt when I was reading this book wasn’t the excitement and allure of Harry riding a broomstick or casting a Patronus – it was more a sense of confusion and disbelief.  I was constantly asking myself, “That really happened?  Are they serious?”

In my opinion, the plot was a little all over the place.  The substance of the main plotline – going back in time to save Cedric – felt completely random and pulled from thin air, and the story only got more perplexing from there.  What shocked me the most was the use of Voldemort’s child as a legitimate plot point.  These attempts at plot twists felt more like poorly-written fanfiction than well-thought-out bends and turns in a story to me.

I’m sure the production of “The Cursed Child” is spectacular, and if given the opportunity to see it, I would take it in a heartbeat.  Characterization-wise, it was heart-warming to watch my beloved Golden Trio come back to life on page, much older since their rampages across the castle grounds.  It’s clear from the dialogue that Harry, Ron and Hermione have grown both physically and mentally since the Battle of Hogwarts, and it was intriguing to see where they had gone since then.  I just wish the play had allowed me to spend more time with these characters and less time wondering what exactly was going on.