Summer Travels: Day 3 of my time in Jerusalem 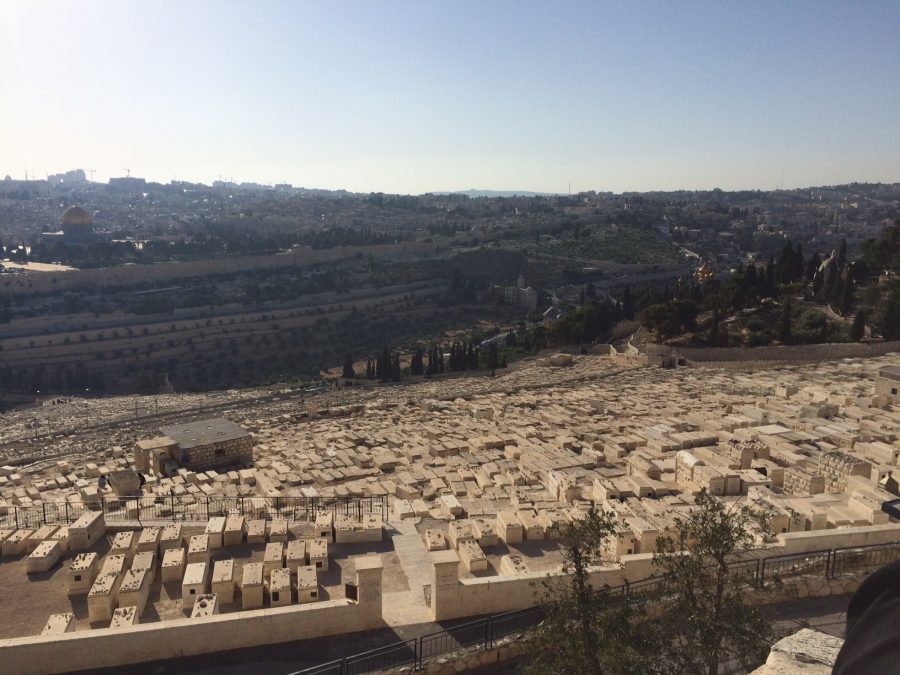 A view of just a fraction of Mount of Olives, located east of the Old City of Jerusalem

If I were to pick a recurring theme for this trip it would be mosques and that things are often not as we expect them to be. As our third day brought us to the West Bank, I was expecting half-demolished building and a sea of browns and blacks. So when we boarded the bus that would take us to our destination, I was shocked to find that the West Bank had an array of historic landmarks in prime conditions, towering mosques and vibrant colors that matched the locals’ personalities.

The first stop on our tour was Hebron, West Bank, where we visited Masjid-e-Khalil. Built over a small cemetery, it lies over the graves of the prophet Abraham, his wife Sara and son Isaac, his son Jacob and his son Yusof. While the exact locations of the burial sites are unknown, coffin-like structures were placed around the mosque in the estimated locations. Out of respect, I chose not to post many of the sites we visited.

Next in the line of mosques we visited was the Mosque of Younis, built on Mount Nabi Younis, the highest peak in the West Bank. According to Islamic tradition, the tomb of Younis, or Jonah in biblical terms, is believed to be in the mosque. For someone who was swallowed by a whale, you would expect a mosque named after him to be a gargantuan structure, however, it was relatively small in comparison to our next stop, the Mosque of Omar in Bethlehem, not to be confused with the one in the Old City of Jerusalem.

As was the case with the first Mosque of Omar, this one also has an interesting – and touching – story behind it. Following the conquest of Bethlehem in 637, the caliph Omar traveled to the city to ensure respect for the Christians and their places of worship. Years later, the Mosque of Omar was built where he prayed – on land donated by the Greek Orthodox Church. Other than display persisting religious co-existence in Bethlehem, the mosque also led us to our next stop: the Church of Nativity, one of the holiest sites in Christianity and one of the oldest churches in use.

Although it is currently undergoing renovations, nothing could hide the beauty of the building. Mosaics, columns, paintings and lanterns adorn every inch of the building. The real treasure, however, is the Grotto of Nativity, a rectangular marble–paved cavern beneath the Church that is believed to be the birthplace of Jesus. Less appreciated is the breathtaking gardens woven throughout the building.

Sooner than I would have liked, we soon found ourselves leaving the foliage behind and heading into the scorching Judean desert to Nebi Musa, a mosque believed to hold the tomb of the prophet Moses. Anyone notice a theme? This was definitely the most secluded place we visited. Other than a few Bedouins, nomadic Arabs, there was not a soul in sight. Only a handful of men are responsible for the upkeep of the entire mosque. They painstakingly generate revenue by selling various trinkets and offering camel rides.

Our last stop was Mount of Olives, named for the olive groves that once covered the area. Now it is home to about 150,000 Jewish graves, solidifying its status as a central aspect of Jewish tradition. But if you hope to be buried here, I suggest you look elsewhere for a site; plots of land can reach upwards of $22,000 due to the area’s significance.

Tomorrow we’ll be staying in the Old City and the day after will be spent packing for our return home. As such, this marks the end of my blog. This by far was one of the most inspirational and eye-opening trips I have ever taken. Jerusalem far exceeded my expectations and has forever made me hesitant to put labels on places or people I have never visited or met.