Summer Travels: Day 2 of my time in Jerusalem 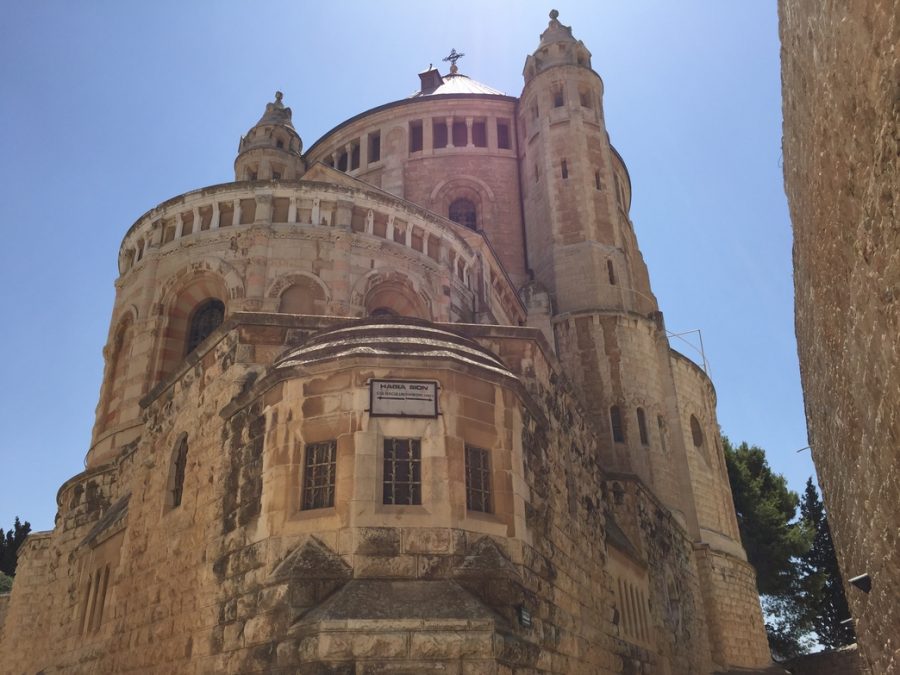 The Hagia Sion is a famed structure just outside the Old City of Jerusalem. It is supposedly where the Virgin Mary passed away.

With yesterday’s adventures in mind, I was eager to continue our tour of Jerusalem. Today, on the second day of our trip, we continued with our explorations of Jerusalem, this time focusing more on historical sites.

Today we made our way through the Damascus Gate, the primary entrance to the Old City of Jerusalem. The much fought-over Old City of Jerusalem contains al-Haram ash-Sharif as well as other sites of religious importance such as the Church of the Holy Sepulchre. The area is divided into four quarters: the Armenian Quarter, Jewish Quarter, Christian Quarter and the Muslim Quarter. The majority of the population is comprised mainly of the latter two, who live in relative harmony. Lining the paths between and within the quarters are endless rows of shops. They may not be the air-conditioned brand-name conglomerates we are used to, but with home grown produce and clothes imported from Turkey, the products are nothing to turn your nose up at.

As much we wanted to, we couldn’t spend too much time window shopping what with our packed schedule. Our first stop was the Mosque of Omar. The story of the mosque dates back to the year 637 after the Siege of Jerusalem, in which the Muslims prevailed. Patriarch Sophronius refused to hand over the keys to anyone but the Caliph. When then Caliph Omar arrived he was invited to pray in the Church of the Holy Sepulchre, but declined and instead prayed on the east steps – where King David is believed to have prayed – so as not to set a precedent. His prediction turned out to be correct, as years later a mosque was erected where he had prayed. However, the current Mosque of Omar is south, rather than east, of the church.

Our next stop was Kind David’s Tomb, located in the Jewish Quarter. While the veracity of this claim is disputed, is it viewed as the burial site of David, King of Israel. Unfortunately, pictures were not allowed. Along the way we also passed by the Church of the Holy Sepulchre, the church serves as the headquarters of the Greek Orthodox Patriarch of Jerusalem. We also saw the outside of the Hagia Sion, another Christian landmark just outside the gates of the Old City. The impressive fortress-like structure is supposedly where the Virgin Mary passed away.
We ended the day at El-Marwani Mosque, located in the basement of Al-Aqsa. The area was once known as Solomon’s Stables as it was used to house Muslim Crusaders’ horses.

While yesterday was an education on culture, today was no doubt a history lesson. Tomorrow we’ll be heading to the West Bank to continue visiting historical sites.