Summer Travels: Day 1 of my time in Jerusalem 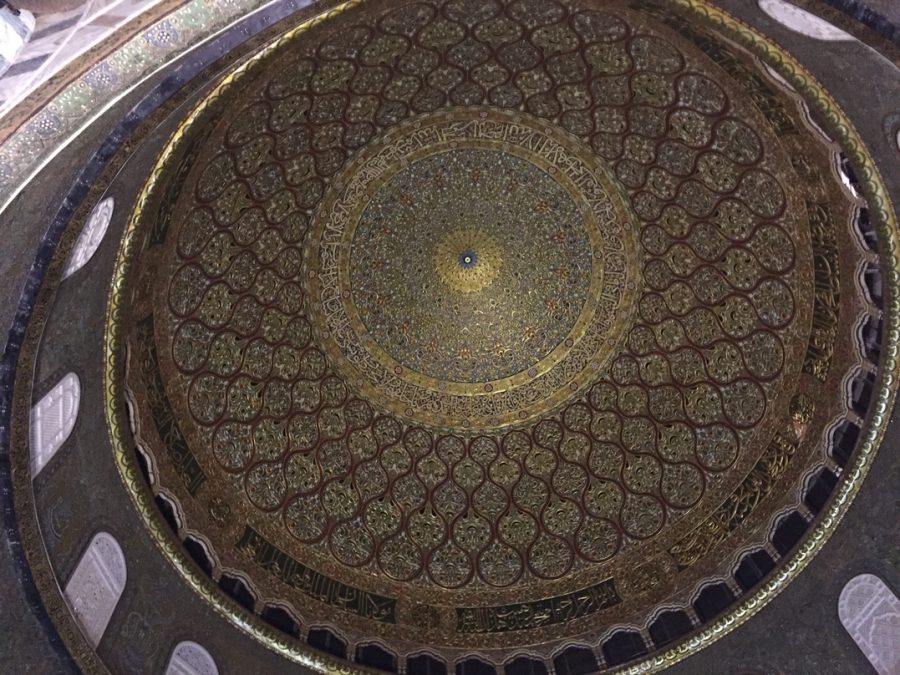 An inside view of the Dome of the Rock. The walls are covered with intricate geometric designs and Arabic calligraphy.

Ask the average Jefferson student where their summer plans are taking them and they’ll often reply with ideal vacation spots: India, a tour of a European nation, maybe a cruise. My family, however, has decided to break tradition and go on a part educational-part religious trip to Jerusalem. While I was initially excited and worried for the trip, what with the heat and living accommodations, it has so far been exceeding expectations and shaping up to be one of the most memorable vacations I have ever taken.

Through this three day blog I will be sharing the details of my travels and explanations of the sites I have visited. It is important to remember that I am not attempting advertise my religion and that this blog will remain devoid of any political remarks.

After a seven hour and 28 minute flight to London, followed by a four hour flight to Israel, we finally landed in Tel Aviv. From there it was a one hour long bus ride to our hotel, The Golden Walls Hotel, in Jerusalem. Don’t let the ramshackle appearance of the outer building fool you, The Golden Walls shattered my expectations of a delapitating building with moldy walls. While it lacked the modern edge of a Marriott, it had an old-timey elegant feel to it, an aspect bolstered by the golden chandeliers hanging from the lobby. An added bonus: our hotel window overlooked the Western Wall. The moral? Places are often not as behind the times as we expect them to be.

While my sisters and I were ready to call it a day, my parents had other plans. And so, we headed out to pray in Al-Aqsa Mosque, the third holiest site in Islam and the foremost reason for our journey. Al-Aqsa was once used to refer to the site in general, but now is commonly used to refer to the mosque itself. The wider compound is known al-Haram ash-Sharif (“the Noble Sanctuary”) and houses three well-known structures: al-Aqsa Mosque, the Dome of the Rock, Dome of the Chain, as well as several minarets. Eleven Herodian gates and their corresponding paths can be used to gain entrance. All are lines with shops, homes and the city’s abundance of stray cats.

Once in the compound we split; my father went to the actual Al-Aqsa Mosque – reserved for men during this time of the day – and the rest of my family went to the Dome of the Rock – reserved for women. The structure is recognizable even from afar due to the dome’s gold covering – 80 kilograms of it. The site is recognized by all three Abrahamic faiths as the place of Abraham’s attempted sacrifice of his son. Christianity and Judaism believe it to be Isaac while Islam believes it is Ishmael. Muslims also believe that it the place where the prophet Muhammad ascended to heaven. Unfortunately, the site was packed when we arrived and we were forced outside, where to sun was considerably less hospitable than the locals.

Throughout my first day, I was touched by the local’s acceptance of us clueless tourists. Rather than scoff at our amateur decision to bring only one water bottle, they offered their own possessions for us to use: a hat by one, a mat for shade by another and food by yet more. While the first day of my trip was not very eventful in the traditional sense, I learned an immense amount about the locals, the culture and my religion. Sure, going up the Eiffel Tower or navigating the canals of Venice would be fun, but highly doubt that any other trip could measure up to what I expect will be a humbling and eye-opening time in Jerusalem