“The Secret Life of Pets” is a feel-good film 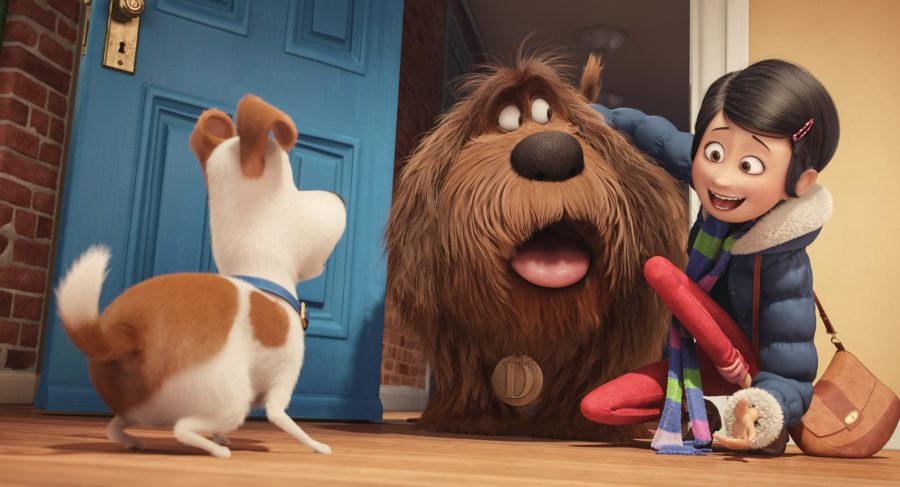 In "The Secret Life of Pets", Max (Louis C.K.) must adjust to the addition of a new dog, Duke (Eric Stonestreet), into his life. The film currently has a rating of 74% on Rotten Tomatoes.

Two dogs wander away while out at a park, get lost in an alleyway and are swiped up by Animal Control.  What could possibly go wrong?

“The Secret Life of Pets” premiered in theaters on July 8 to eager audiences intrigued by the story of Max (Louis C.K.) and Duke (Eric Stonestreet), two dogs who aren’t as motivated to get along as they are to get home.  On their journey traversing the New York sewer system, a residential neighborhood and even a sausage production factory, the dogs eventually bond and discover that they might not be so different from each other after all.

All in all, “The Secret Life of Pets” didn’t disappoint.  It was light-hearted, amusing and left me feeling pretty warm and fuzzy by the closing credits.  While the animals in the film were adorable and the animation spectacular, however, the plot of the movie didn’t feel like anything special.  I certainly walked out of the theater feeling satisfied, but the movie didn’t reveal any ground-breaking lesson or moral like I was expecting it to.  This isn’t necessarily a bad thing, and it doesn’t have to be a standard for all movies to meet; the allure of the film was more in the relationship between humans and pets than it was in an overarching lesson.

Duke and Max’s journey did keep me watching the movie, but the substance of the journey itself seemed to run around in circles.  The film introduced key plot points only to resolve them minutes later, greatly diminishing their impact on me as a viewer.  Although the two dogs did eventually put aside their differences and form a friendship as the movie progressed, it seemed to be more through silly experiences and strange dream sequences than it was through actual dialogue and action.  This movie isn’t intended to be extremely deep and thought-provoking – its appeal is much more in the humor than it is in the storyline.

One aspect of the movie I particularly enjoyed was the character Snowball, voiced by Kevin Hart.  Snowball leads a “revolution” underneath the city streets consisting of pets whose owners have mistreated or abandoned them, vowing to wage war against the human race.  His role in the film was mainly comical, but Hart’s performance was outstanding, leaving a smile on my face every time he cracked a one-liner or gave a dramatic outburst.  Snowball’s character was certainly funny, but at his core was a deep connection and care for his friends, regardless of his diabolical plot to end humanity.  Hart carried his role perfectly, making him and his character one of my favorite parts of the movie.

“The Secret Life of Pets” certainly made an impact on the big screen, though the depth of its content didn’t delve much beneath the surface level.  Despite the somewhat repetitive plot, it was heart-warming to watch the reactions of the pets when their owners returned home, as well as the pure love between owner and pet at the end of the day.  The bond between the animals and their “humans” was touching to witness, and if I could see this movie again just for that, I would.