The Jefferson Physics Team has a successful year 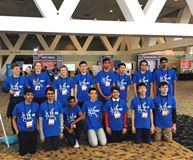 The Jefferson Physics Team goes to an American Physics Society Meeting. Next year, they hope to go on more field trips to places where real-life physics is practiced.

Jefferson is known to have a wide variety of clubs for people to explore their interests, and one of them is the Physics Team. This year, some of the Physics Team’s accomplishments include gaining about 50 new members, going on a field trip to the American Physics Society, participating in competitions, and increasing outreach. Senior and Captain Ross Dempsey also released a Physics textbook at the beginning of the year.

“[I] wrote my Physics textbook with Shankar Balasubramanian, who was last year’s captain,” Dempsey said. “We published that earlier this year, and it all started from our Physics teams notes. So, being on the Physics team was a big part of making that possible.”

The Jefferson Physics Team is actually comprised of three teams, an A, B and C team. The C team is for students who aren’t in AP Physics yet. At C Team meetings, students learn about basic Physics concepts.

“[I just] gained background knowledge on Physics [from being on the C Team],” freshman and C Team member Joyce Liu said. “I’m not serious about Physics yet just because it’s really early but I’ve learned basic topics on the subject and I’ve met a lot of really cool people.”

Every physics team member has a favorite part about being on the team. One aspect of the team that members enjoy is their ability to join with other clubs and programs for certain activities.

“My favorite part of Physics team is all of the outreach we do,” junior and Publicist Anshu Sharma said. “We started a partnership with TWIST this year, we had a very big Techstravaganza booth this year, and some of our Physics Team officers helped develop TJ Peer Tutoring. It was immensely rewarding to help increase the accessibility and teaching [of] the beauty of physics. A lot of people think it’s hard, but we try to make it fun and we really want to continue that.”

Overall, the physics team was able to accomplish a lot this year. From learning about topics in lectures to field trips to American Physics Society (APS) meetings, the team has been a great way for people passionate about Physics to learn more about it.

“I’ve learned new ways to look at problems,” Sharma said. “I’ve tried out a lot of different types of problems from Physics Team problem sets, contests like ‘F=ma,’ and general homework in physics class. I also learned how to teach others about the beauty of physics through study guides, guest lecturing, and things like that. I just learned a lot about physics. It was a really good experience for me.”