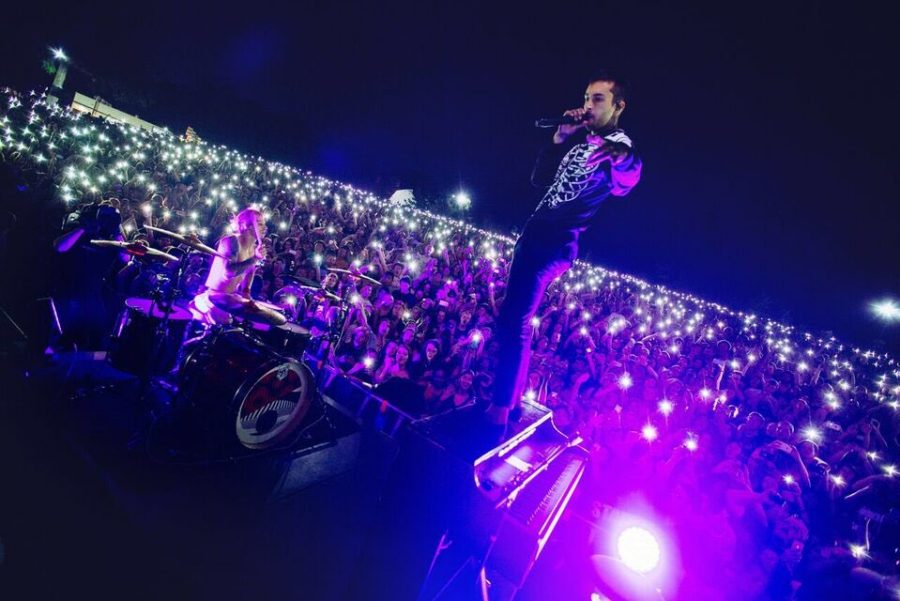 twenty one pilots performs at Merriweather Post Pavilion in Columbia, Md. on June 10.

It’s 8:15 p.m., the pavilion is dimly lit by a setting sun, and thousands of fans shout the band name’s initials “T-O-P” on repeat. Suddenly, the stage lights up and it’s clear to all — the twenty one pilots show has begun. Watching twenty one pilots rise to mainstream fame over the years has intriguing, because the band has still succeeded to make their songs and concerts to connect with the audience.

The band announced the “Emotional Roadshow” tour last fall. Though they have been playing in arenas in other parts of the county for some time, this is the first time twenty one pilots played in an outdoor venue for their local tour date.

twenty one pilots is known to bring high energy to their concerts, no matter how many people are in the audience.

twenty one pilots opened the show with an excerpt from “Fairly Local”, which was a good addition to their setlist because many fans were disappointed that they did not play it on their last tour.

At one point, the stage went dark and the band appeared in the walkway between the pavilion and the lawn. This allowed the audience in the back of the pavilion and some of the lawn to get close to the band while they played a medley of their older songs. A definite standout moment was when they played fan favorite “Kitchen Sink”, a track from the self-released 2011 album, “Regional at Best”.

The band kept up past concert “traditions” throughout the rest of the show, such as Joseph climbing a structure in the back of the pavilion during “Car Radio” and playing “Trees” as the last encore song.

twenty one pilots’ previous album “Blurryface” had a visual theme, with patterns on the album art representing separate songs. The clips playing on the LCD screen behind the band were animated with these patterns, making them cohesive. This tour is also more centered on Dun, with the band playing covers featuring the trumpet.

twenty one pilots will soon be touring worldwide. Their latest song, released on June 15, will be on the “Suicide Squad” soundtrack.