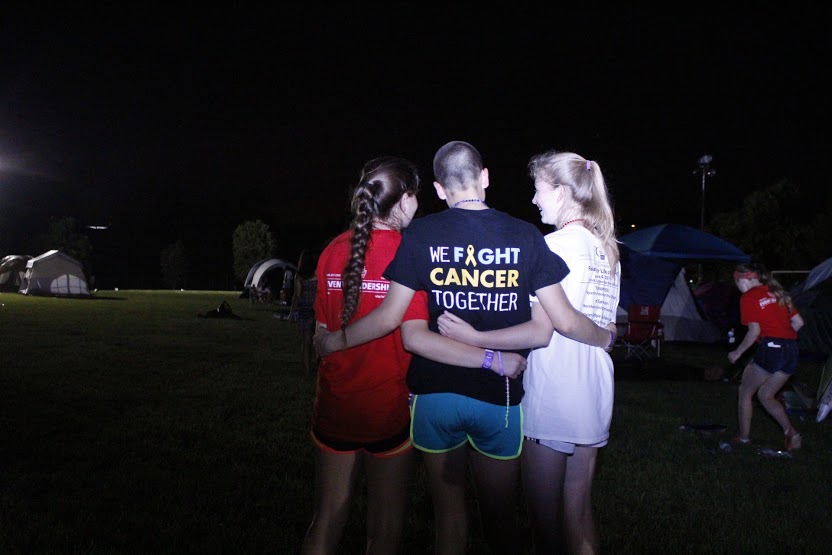 Freshman Mallory Brodnick (center) at the Relay for Life event on June 4, 2016. She raised more money than any other student at Jefferson.

With 53 teams, 421 participants and $57,236.10 raised in donations, Relay for Life is undeniably a large event at Jefferson. However, few have raised as much money as freshman Mallory Brodnick, who has accumulated $9,472.35 for her team, Kelly Strong, the namesake being her 13 year old sister, an osteosarcoma patient. Brodnick’s efforts have made her the top participant in Relay for Life at Jefferson and has made her team the second highest earner with a total of $10,589.59.  Surprisingly – given her success – she was initially ambivalent about getting involved with the organization.

“I wasn’t going to do it because I thought it would be hard to raise money, but a lot of my friends were doing it,” Mallory Brodnick said. Then I made friends with a group that were all in the same team so I decided to do it to.”

Her sister’s diagnosis also played a role in her decision to create and join a team. “I probably wouldn’t have done this if she hadn’t been diagnosed.”

But just how did Brodnick manage to raise so much money? The answer does not lie in conventional bake sales and car washes, but the power of ties and social media. Brodnick’s parents assisted her in her endeavor by reaching out to friends and family through various outlets.

“My dad sends out a weekly newsletter to all our friends and he includes a link and posts it on Facebook. All our friends know about Kelly so they donate.”

Brodnick is not the only one raising money for cancer and Kelly Brodnick, the latter’s best friend has sold nearly 600 t-shirts baring the words “Kelly Strong.”

Indeed, Kelly Brodnick is strong. As with every cancer patient the road to recovery is not an easy one. Diagnosed on April 1, 2015 the year has gone by in a blur of treatments. However, there is a light at the end of the tunnel.

“She’s doing pretty well, she’s getting surgery on the 21st to remove the tumor in her knee and she’s had a two week break,” Mallory Brodnick said.

From rallying together a community to a recent shout out on EllenTube, Kelly Brodnick’s diagnosis has had many outcomes, not the least of which being inspiring Brodnick’s newfound passion for raising funds for cancer.

“I’ll definitely do this every year.”