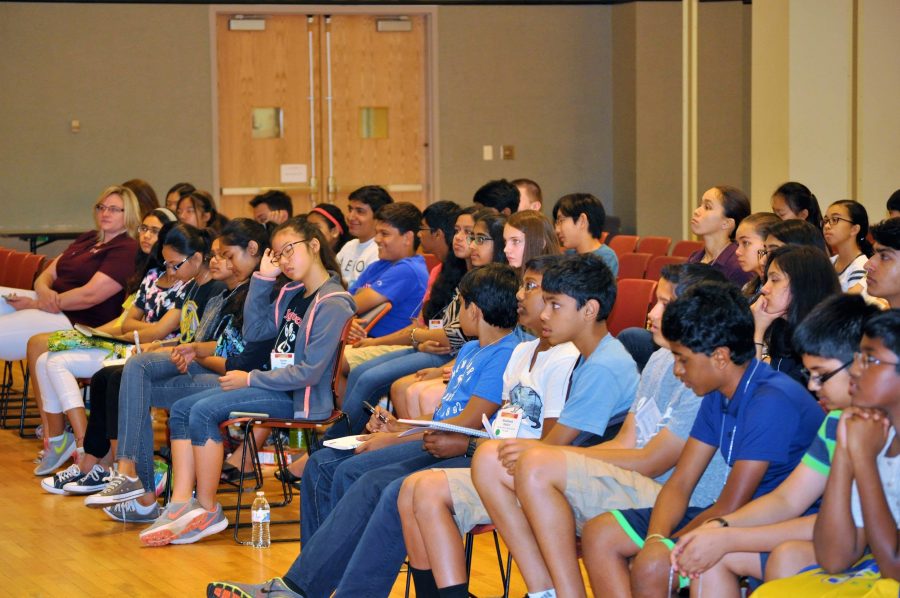 A group of middle school students listen to Prathik Naidu's keynote speech at the beginning of the conference. Photo courtesy of Prathik Naidu.

Inspired by a conference he attended in Dublin, junior Prathik Naidu helped organize and host a bioinformatics conference at George Mason University on June 5. The purpose of the conference was to teach kids at the middle and high school level about the field of bioinformatics, and to raise awareness about how the fields of computer science and biology can be connected in ways that are not normally thought about.

“Bioinformatics is using computer science and the power of computer to help make sense of and understand biology and biological data,” Naidu said.

Q: Can you please tell me a little bit about the conference you hosted?

A: The conference was focused on bringing computation and biology and bioinformatics down to middle and high school students. I was inspired because I was one of the few high school students who was at a conference in Dublin where I was able to present some of my research that I’ve been doing at Johns Hopkins University, and I was really wondering why I was one of the younger students there, and I wondered how we can bring this type of technology and fields to younger students.

Q: Apart from the conference, what else has gotten you interested in the field of bioinformatics?

A: In freshman year I took AP Computer Science and I was taking honors biology so I was really interested in those two fields. As I explored AP Biology in sophomore year I really became interested in how we can use computer science and computers to really understand all this public biological data. I did some research at Johns Hopkins between my freshman and sophomore year, where I was really able to explore and understand the field of genetics, and that’s really what got me interested in doing more research, which I’ll be continuing this summer.

Q: What kind of things did you talk about in the conference?

A: At the conference there were three different workshops, ranging from protein modeling to learning about how to mine for data, or even just writing code to analyze biological data. Apart from that, we also had opportunities for students to create their own idea that uses computer science to tackle a global health problem. There was a science fair at the end where they could present those ideas and judges from Georgetown and George Washington came to help organize that information and to help judge and pick the best projects.

Q: What role did you play in the conference?

A: I was one of the lead organizers. I had the idea and I pitched it to some individuals who helped sponsor. I was the one who managed a lot of the logistics. In terms of professional titles you could call me the conference chair. I worked with some individuals from international organizations who provided a lot of sponsorship to help bring this idea to a reality in terms of the funding, the logistics, coordinating the event at George Mason University. I would say I focused a lot on just building the conference and making it happen.

Q: Do you think it’s difficult to teach people about bioinformatics because it pertains to more than one field?

A: Often times in classes, people don’t build the connections between computer science and biology, which is what this field is about. It’s hard to realize you can write code to analyze biological principles. I think the goal of this conference, which we were successful at in terms of student feedback, was being able to show them how writing a simple algorithm can really help make a difference in understanding biological data. I would say that the learning curve isn’t big if you teach them these concepts in the right way and bring it down to the level at which youth can understand.

Q: What are you plans for moving forward with this in the future?

A: Next year we’re going to be having our second annual conference. I’m working with The International Society for Computational Biology (ISCB) and I’m one of the youth heads there. The organization is trying to bring this to other regions. We’re trying to figure out a way we can hold conferences in Texas, New Jersey and California.

Q: Is there a club a student can join if they want to get involved with this?

A: Wednesday A block there’s the Bioinformatics Society. We have strong membership and we do a lot of interesting activities ranging from coding challenges to a club research project, which we started this year and is becoming very popular. We’re allowing students to explore the field of genomics by analyzing data that’s available to the public. We’re also just teaching them in general how to apply computer science to biology.