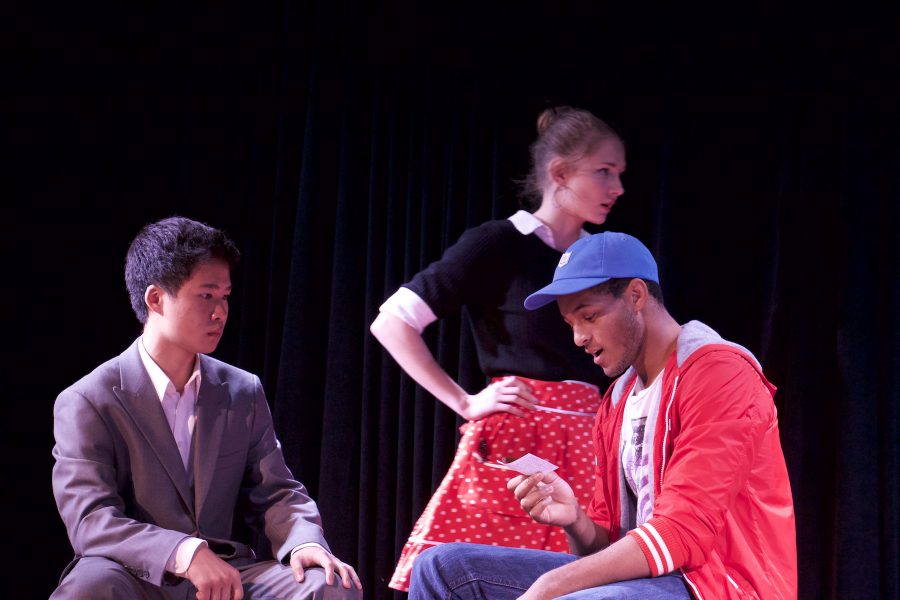 Juniors Brittany Csik and Timothy Chan and senior Connor Jones perform "The Philadelphis" directed by Sarah Gold. The Jefferson drama department's 29th Annual Knight of One Axe was held on June 4 and 5 in the Black Box Theater.

TJ Drama’s 29th annual Knight of One Axe, a play on the words “night of one acts”, took place on June 4 this year. The play featured six student-directed acts, and one act directed by Mr. Pollet, an English 10 and Film Study teacher at Jefferson.

Knight of One Axe is one of TJ Drama’s smaller productions this year.

“One Axe is different from our other shows because it’s really small and it’s a series of one act shows that are unconnected,” sophomore Masha Goykhberg said.

Though most of the plays were written by Ms. Lowrey, the overall director of the drama department, one of the acts, Dust and Shadows, was written by senior Bradford Case.

“All of the acts this year were student-directed, and one of them, Dust and Shadow, was actually written by a student,” Goykhberg said.

One Axe is shorter and generally less stressful than other productions put on by TJ Drama.

“One Axe is a lot less commitment, so it’s less stressful,” senior Abby Peterson said. “You only have a couple pages of lines as opposed to an entire show, so it’s just a lot more fun and laid back as opposed to the musical which is much more rigorous and time consuming.”

“You just audition one day and tell them your monologue and they just assign you to a group,” sophomore Soham Ray said. “And then you just practice in groups and perform it on the night of the play.”

One Axe is a good way for new members of drama to learn about the processes behind a production.

“The fact that these are one act plays means that they’re really low commitment. They’re great for people who want to do a little role and just want to have a taste of what it’s like to act,” An said.

There are many things students can do if they want to get involved with the drama program at Jefferson.

“If you really want to get involved with TJ Drama, you can just show up to the Black Box, you can sign up for an eighth period, or you can message someone you know that’s in Drama,” Goykhberg said. “We’re very accepting, we love getting new people, and even if you don’t get a part in a show, you can still join tech because we really need more tech people.”