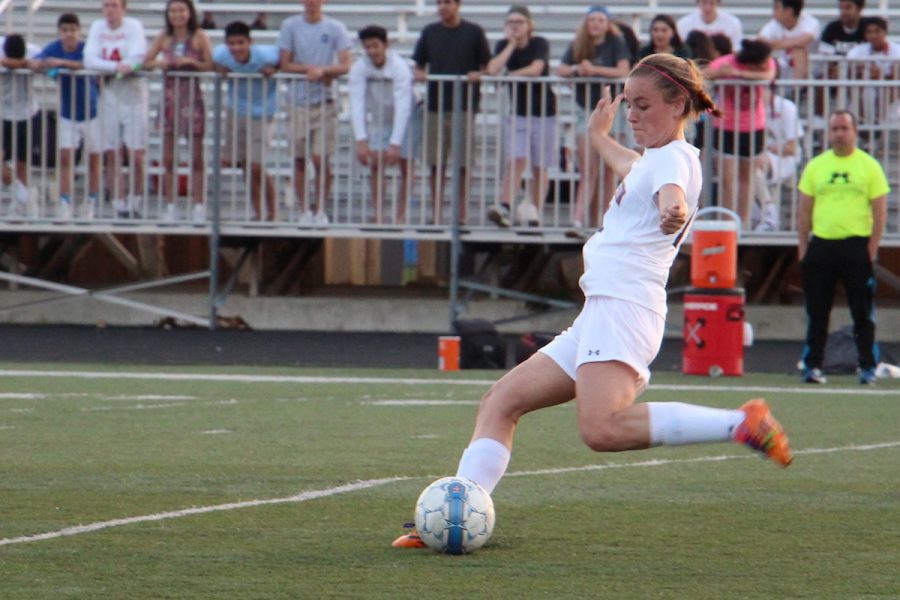 Senior Maaike Blindenbach kicks the ball during the girls varsity soccer game against Potomac Falls on May 24.

Following a 2-1 loss to Marshall at the Capitol Conference championship, the Jefferson girls varsity soccer team played their first regionals game against Potomac Falls on May 24. The game was held at Lee and started at 7:30 p.m. Jefferson won the game 1-0, qualifying them for quarterfinals.

“We went into all the games just wanting to win and do our best. Our big goal this season was to win the Conference, but even though we didn’t win the conference, we still made it to regionals and that was a big accomplishment for us,” sophomore Margaret Covey, midfield and forward said.

This was the first game Jefferson has played Potomac Falls this season so they approached the game with more caution.

“We have never actually played Potomac Falls before, but we did have access to their previous rankings. We were a little unsure on how the game would go, so we played really defensively in the first 5-10 minutes, which probably was why we weren’t as aggressive at first,” senior Chelsea Li, midfield and forward, said.

At the end of the first half, the two teams were tied 0-0. For the second half, however, Jefferson changed their strategy to play more offensively, and senior Kaila Stein scored a goal.

“For the first five minutes of the second half we came out strong, had a lot of energy and we were connecting a lot better with people. After we did score we kind of went back to our defensive mode that we had in the first half,” Covey said.

After this game, Jefferson played one more game against Albemarle on May 26, which they lost 4-0. They ended their season with a total of nine wins and six losses.

“The biggest improvement was we could work better together, and we figured out each other’s strengths, and we had a pretty set strategy by the end of the season, we knew who to pass to and how to pass to each other,” Li said.