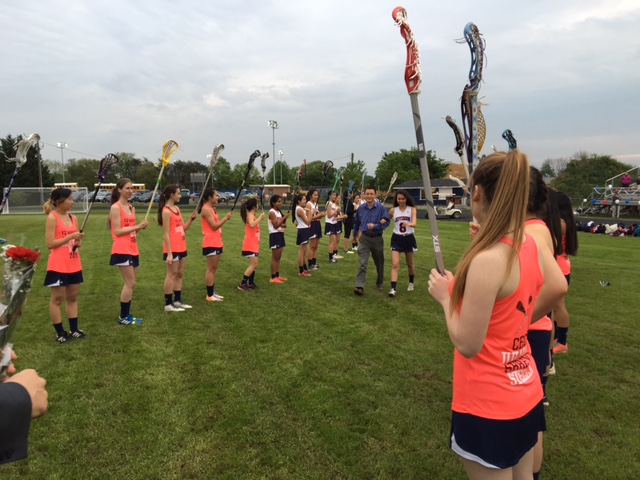 Senior lacrosse player Cece Xiao makes her way through the JV lacrosse team's path to accept a bouquet of flowers and handshake from Dr. Glazer.

For the senior participants of Girls’ Varsity Lacrosse’s penultimate match, their Senior night on May 9th became not a game of battle, but of spirit. Before they could ready their lacrosse sticks for the game to come, each of the four graduating seniors were graced as their fellow players formed a gated tunnel for them to cross in ceremony. From there, their families accompanied each of them as they received a bouquet of flowers, with both spectators and players applauding their seasonal efforts.

“The [seniors] were extremely happy, thankful for a great season, a great team and for the lacrosse program,” Junior Varsity (JV) lacrosse player freshman Samiksha Kale said. “They were really looking forward to an amazing ending to their season.”

As for the seniors themselves, they were quite taken aback by the processions, deeming them unlike any displays they’d witnessed or contributed to in previous years.

“I mean, I’ve seen Senior Nights over the past few years, but they definitely did a better job than anyone I’ve seen,” Varsity lacrosse player and senior Shreya Mandava said. “The success was partly because there were less seniors for the underclassmen to prepare for, but either way you could still see how much work and love they’d put into it, and that increased our will to win and make it one of our best games.”

The event succeeded in raising their moral indeed, as they scored a goal within 40 seconds of playing, hastening their anticipated win against J.E.B. Stuart High School. While observing their passes, one could easily see each player placing more and more reliance onto their peers as their last opportunity for glory in the regular season approached.

“After all of our morning practices together, we increased our passing, endurance, and most of all our communication,” lacrosse player and senior Juliana Bain said. “Over the course of the season, [the varsity players] bonded so well and ultimately put more trust into each other [so] we could achieve getting the ball [..] down the field to attack.”

As the announcer called for the game’s end, the underclassmen players, though disheartened to see their role models and friends leave, were among the seniors’ most vibrant fanatics, cheering as the bullhorn sounded the end of Jefferson’s final regular season victory.

“Because of Senior night, our approach and preparation were different,” lacrosse player freshman Emmalyn Kim said. “Our ability to accommodate the difference, along with the improvements and friendships we’d made, caused us to get both the head up, and ultimately a win.”

In the end, however, it seemed that the farewell wasn’t only difficult for the underclassmen tasked with arranging the festivities, but also for the departing seniors themselves, who had long since formed connections within the team.

“Freshman year, I only jumped into lacrosse because all my friends were doing it, but with all the fun I’ve had over the years, and all the new friends I’ve made, the program will always have a place in my heart,” lacrosse player Mandava said.