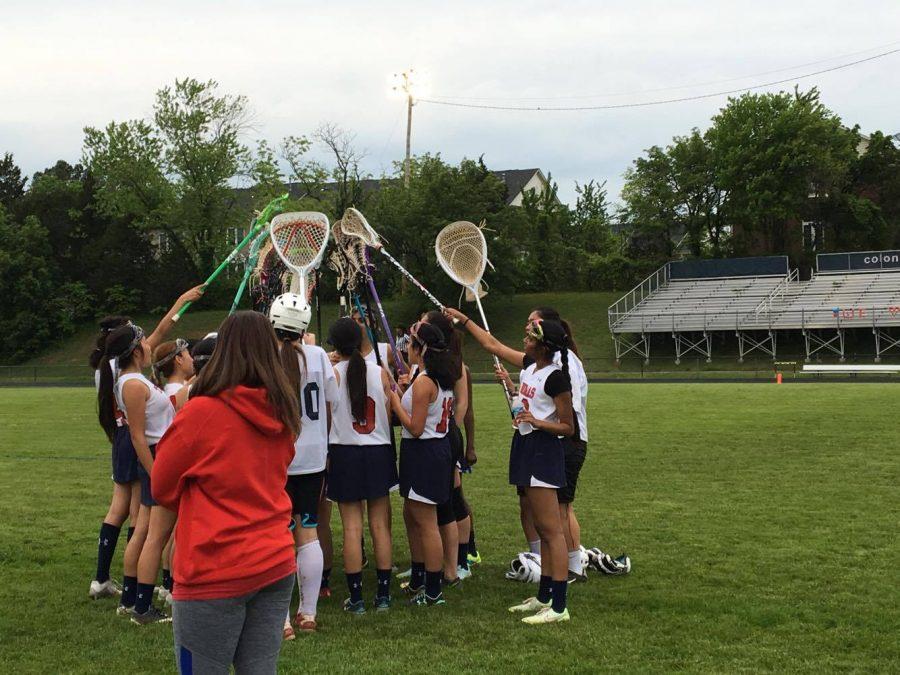 With several victories under their wing, the Junior Varsity (JV) Girls’ Lacrosse team had easy pickings as they approached their final game of the season on May 9. After a pre-game ritual and decision of strategy, the players assembled themselves for the face-off to commence the match.

“Beforehand, we actually practiced like we normally did because figured we couldn’t just cram intense practice into a few days,” JV player freshman Annie Wang said. “We were going to be either ready for it, or not. Luckily, we were ready.”

The game itself ensued rather smoothly for the Jefferson team, with several points as players cleanly executed passes and snuffed the ball between the crosses of the opponent’s, J. E. B. Stuart High School’s, defenders. Their efforts remained fruitful as they achieved a solid lead of six to one within the first half of their game.
“During this game, we were more motivated to win especially because it was the last time we would be playing as a team,” JV player freshman Jennifer Hernandez said. “Passes were better, catches were solid, and the overall team flow improved a ton because of how we trusted our teammates.”

As per the advice of Coach Lauren Alam, the team’s strategy consisted primarily of spreading out into clumps to allow for rapid passing and dodging. As Stuart’s more aggressive players began to pressure Jefferson’s offenses into clusters, the team’s ability to score was impaired, resulting in a total of three scores by their opponent.

“Even if we make mistakes, our team anticipated to do well, given our skill development over the season,” Hernandez said. “The team’s bond really pushed us to continue trying hard after these losses.”

However, an injury faced by one of Stuart’s players left time for the team to huddle and reconsider their plan of action, choosing to press for adequate positioning within the field’s center to allow for frequent passes to the offensive players of the team. As their game concluded with a twelve to six victory, the JV team gathered for a toast to their win, raising their lacrosse sticks in glory.

“I did my best, listened to what the coach told me to do, and noticed a major improvement in the cooperation within our team,” Wang said. “The members all supported each other more than usual, we bonded better than usual, and we had more fun than usual.”