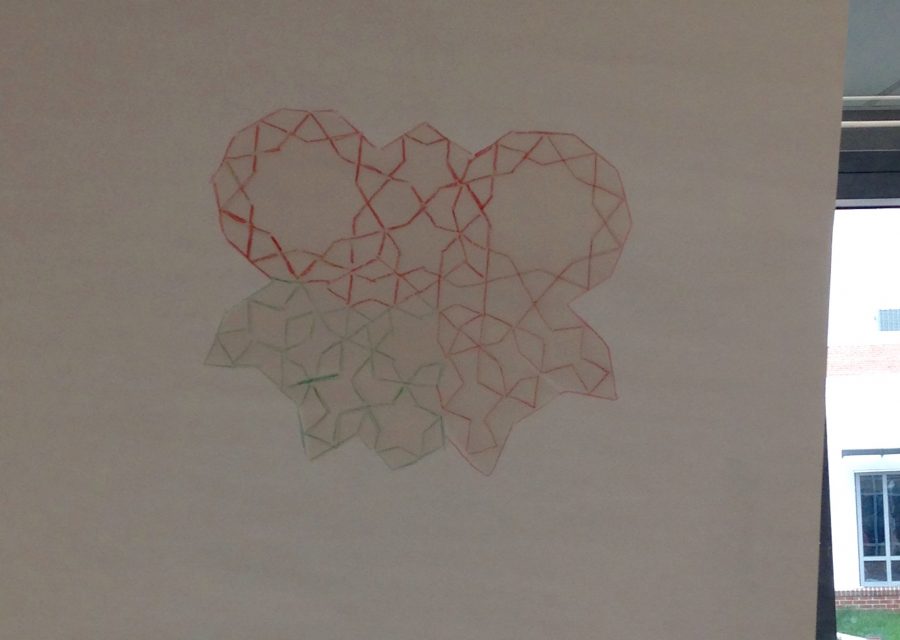 Students who attended the special Muslim Student Association event designed girih tiles and traced them onto larger sheets of paper. Girih tiles are a set of tiles that create geometric patterns and are used commonly in Islamic architecture.

On April 29, the Muslim Student Association (MSA) held a special session during their Friday A block meeting to learn about girih tiles. MSA welcomed Jefferson Class of 2005 graduate Matthew Brooks to hold the session.

Brooks runs an organization called NuqtaARTS, which gives classes in and around the Washington D.C. area on the math and science associated with Islamic art. NuqtaARTS provides classes in, among other things, water marbling, mural painting and creating girih tiles.

During the MSA meeting, Brooks first talked about what girih tiles were. He explained that although these tiles were recently discovered in the 1970s, they were used for hundreds of years before then. Girih tiles are a set of five tiles that are used to create geometric patterns to decorate buildings in Islamic culture. All of the tiles have at least one line of symmetry, but certain tiles have other types of symmetry as well.

“I think girih tiles just open up realms of possibility and I think they’re just fascinating,” Brooks said. “It’s full of mathematics, and it’s in current research – a Harvard professor is researching it. I like playing around with them, so I just wanted to share the tiles.”

After learning about the tiles, Jefferson students who attended the MSA meeting tried to make their own girih tiles. Students first cut out pre-made templates and designed the tiles in the way they wanted. Then, students traced their designs onto a larger sheet of paper such that only some of the original lines were shown. Many students liked the final designs and were surprised with the results.

“I really liked how the girih tiles weren’t regular geometric tiles that formed the same pattern over and over,” freshman Zyannah Mallich, a MSA member, said. “Also, I liked how you could put the girih tiles together in any way you want and how everyone’s final design was unique and different.”