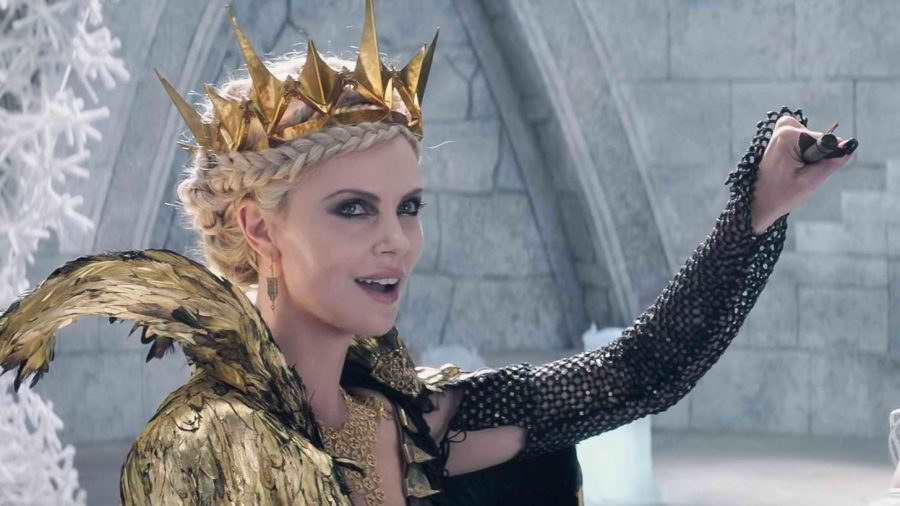 Charlize Theron, reprising her role as Ravenna, smirks as she catches a bolt.

Starring Chris Hemsworth, Jessica Chastain, Emily Blunt, and Charlize Theron, “The Huntsman: Winter Wars” marked the second installment to “Snow White and the Huntsman.” Being both a sequel and a prequel, “The Huntsman” already had inherent faults, dooming it to fall short of great film.

Any compelling movie has push and pull, progressing the overarching storyline. “The Huntsman” fails in this aspect by plainly presenting one idea after another with little to no build-up. Cliched plots spawned predictability from the moment any mystery presented itself. The characters also play into this by never fully developing into dynamic characters, making poor use of the star studded cast. For instance the motive of Freya, the main antagonist, was tired and frankly unbelievable to justify her actions, making her seem a villain for the sake of being a villain.

In addition, for a film based on Snow White, “The Huntsman” is almost void of any allusions to the original story. Snow White is entirely absent, the magic mirror on the wall just as well could’ve been any other evil mirror, and the witch, Ravenna, doesn’t make an appearance until the last fourth of the movie. The screenwriters seemed driven to write out as much of the fairy tale possible while still calling it a prequel/sequel to a movie titled “Snow White and the Huntsman.” If anything, equipped with an angsty ice queen, this film is better suited to the Frozen franchise than Snow White.

That being said, “The Huntsman” is a visually stunning piece. Visual effects artist turned director Cedric Nicolas-Troyan, put his past experience to use, creating a world straight out of a fairy tale. From the goblins to the barren ice lands, Nicolas-Troyan materialized dreams from the audience’s childhood complete with extravagant costuming. Furthermore, the film succeeds in supplying banter to lighten the otherwise gloomy and somewhat dull beginning in the form of treasure-hunting dwarf Bromwyn, played by Sheridan Smith.
Overall, while “The Huntsman: Winter Wars” fails to provide a thought provoking 114 minutes, if not watched with a fine-tooth comb, can still be an enjoyable classic fairy tale inspired story line.