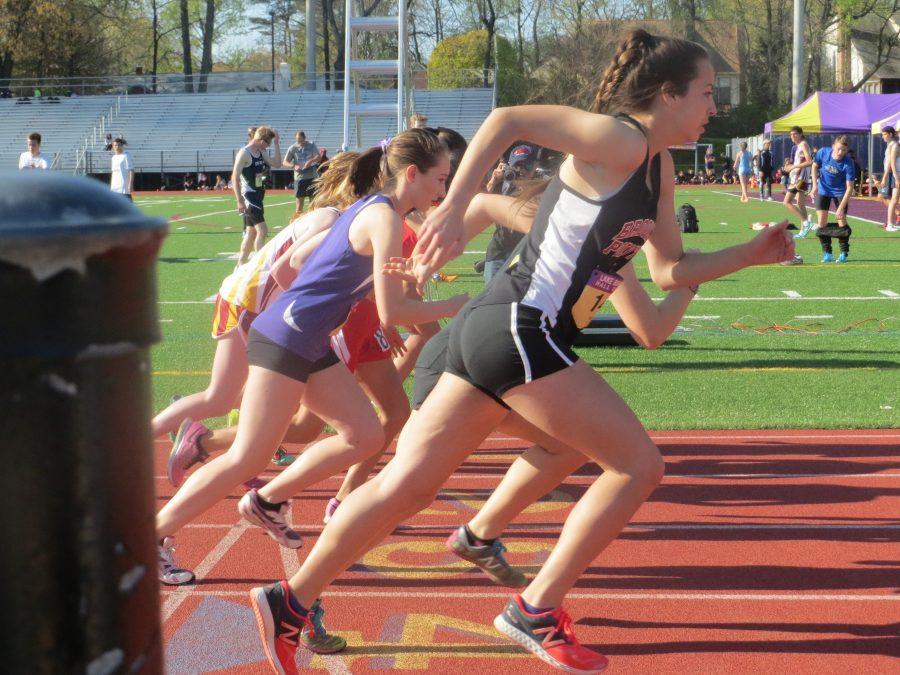 The girls 800m kicks off at the gunshot

“This was a big and very competitive meet with some of the best runners in the area, and a lot of meet records were set,”  junior Caroline Cox said. Cox participated in the girls’ 800 meter run, and set a personal record for herself by one harrowing second. “I was off of my goal time by another second, since my goal was to conference qualify in the event.”

Though Jefferson was underrepresented in comparison to some other schools, many of the athletes that participated excelled and accomplished personal goals.

“Almost everyone I talked to from Jefferson had personal records in the event that they competed in,” Cox said.

Not only were personal records broken, but many Jefferson athletes also performed notably well in comparison to others in their event. Junior Saurav Velleleth and senior Nate Foss were ranked third and fifth place respectively in the boys’ 1600 meter run, a highly competitive event, out of 59 athletes in total.

“I broke 4:20 for the first time, which was my goal going in,” Foss said. “4:20 is significant because once you’re that fast, you can train at a high level on any college team.”

Other achievements worth noting include senior Nathan Riopelle, who ranked ninth out of 49 in the boys’ 3200 meter run, and senior Claire Dong, who ranked seventh out of 31 in the preliminary girls’ 100m hurdles. But for Dong, it’s not enough.

“It wasn’t the best race I have ever run, and I still have a lot of room for improvement, but it was good practice!” she said.

Accomplished athletes such as Dong can only get to where they are with lots of hard work and dedication, which members of spring track are experienced with.

“At practice, I kind of alternate between working on hurdles techniques, practicing starts with the blocks, working on speed (so short sprints), and building up endurance (longer sprints),” Dong explained.
But for Cox, track isn’t just about the physical.

“ I’ve been preparing not only by going to practice and running every day but also by mentally preparing, since track is a highly mental sport and I also have bad nerves,” she explained.

Whether they met or missed their goals, the Lake Braddock Hall of Fame meet provided an opportunity for Jefferson Track & Field athletes to run, jump, vault, or throw alongside other competitive students from all over Northern Virginia. Despite a lack of proper representation, most students performed extremely well and got valuable practice for future conferences. For sophomore Anna Zhang, who ran the relay, the Hall of Fame meet was an uplifting experience that suggested even better races to come.

“I think Jefferson did great, and am looking forward to our improvement as the season continues!” Zhang said.

This event is also covered in the May issue of tjTODAY.