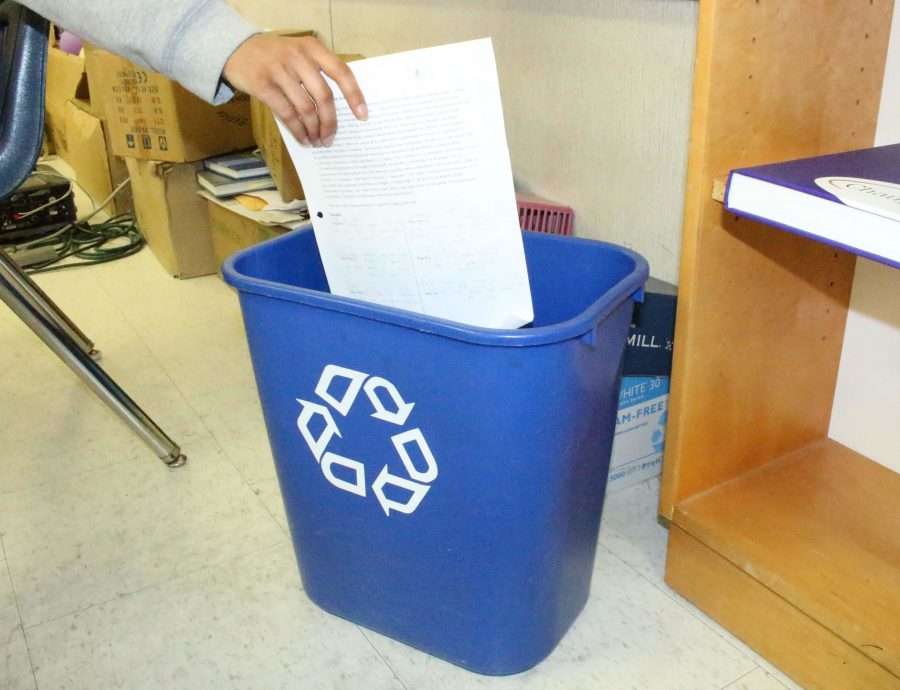 Earth Week, which was from April 11 to 15, aimed to educate students about environmental issues around the world. Though the main focus of this year's Earth Week was bees, Future Energy Action Team (FEAT) also urges students to recycle in order to save energy.

Planet Earth is losing over 15 billion trees each year, which is about 56 acres of forest per minute. This is causing species to go extinct at a faster rate than ever before. According to the Center for Biology Diversity, we’re currently in the sixth mass extinction of plants and animals, and we’re experiencing the worst series of die-offs since the loss of the dinosaurs 65 million years ago.

Unfortunately, this wave of mass extinction isn’t being caused by apocalyptic events out of our control. Instead, it is us humans that are causing such a big dilemma. In 2003, Harvard biologist E. O. Wilson calculated in his book “The Future of Life” that Earth would “lose half of its higher life forms by 2100 if the current rate of human disruption continues”.

Though we can’t reverse the extinctions of species, there are actions we can take to ameliorate the negative effects we’ve had on our planet. An organization called the Earth Day Network aims to “broaden and diversify the environmental movement worldwide and to mobilize it as the most effective vehicle to build a healthy, sustainable environment, address climate change and protect the Earth for future generations.” This organization is also behind the Earth Day celebrated on April 22 each year, which is held to demonstrate support for environmental protection. According to the Earth Day website, the first Earth Day in 1970 activated 20 million Americans, and it is credited with launching the modern environmental movement.

From Earth Day came the creation of Earth Week, and though it isn’t recognized nationally, it is celebrated by universities and schools across America, including TJ. This year Earth Week was hosted primarily by Future Energy Action Team (FEAT), with input from clubs like Environmental Impact Club (EIC) and Cultivators of the Earth.

Q: Is it just one club that’s hosting Earth Week, or is there collaboration between clubs?

A: Future Energy Action Team is the main club hosting it, but we’re also working with  EIC, which helped with the power down day, and also with members of Cultivators of the Earth, who are helping us with the gardening event on Friday. There was also a lot of input by Annam Khan and Ricky Hage, who helped with organizing it.

Q: Why is it important to raise awareness about environmental issues?

A: We use energy from fossil fuels and coal and  it’s making a huge impact on our environment. I think this is one big issue our future generation needs to focus on, and also to focus on energy awareness and trying to use renewable energy sources. There are also other problems with deforestation and  not using our resources properly, not just in the Jefferson community, but worldwide. What I wanted to do when I created FEAT was I wanted to raise more awareness in the Jefferson community about issues that a lot of people don’t know about. For example, a lot of people know about the fossil fuels issue and eutrophication, but I wanted to try and focus on issues that aren’t as widely known, like the trash gyre that’s in the pacific ocean. Last year for Earth Week, we focused on palm oil issues and how it’s used in a lot of foods, from skittles, crackers and a lot of different ready-made foods. It’s causing a lot of deforestation in Indonesia and Southeast Asia. Another lesser-known issue is the one regarding bees and pesticides, which is the main focus of this year’s Earth Week. We need pesticides, but we also need to balance the use with trying to help the environment. We need to think about “How do we use resources without harming the environment?”.

Q: How can we, as students, help raise awareness about environmental issues?

A: I think the main way is to first just understand the different issues. After that, just trying to be aware. For example, if you’re going to the store, try and buy organic food instead of buying bulk junk food. Making these small sacrifices can help not only the environment, but also your health. Also, telling your friends your local community about what you’re doing and what they can do. You don’t have to go to Africa and educate all the kids there, which anyway isn’t easy for a high schoolers to do. Just stay local and tell your family about these different issues.

Q: What do you think is the biggest threat to the environment today?

A: I think the biggest threat is definitely the overuse of fossil fuels as an energy source. I think the biggest thing our future generation has to do in terms of helping the environment is efficiently using renewable sources, whether it be solar or wind, and just trying to come off of fossil fuels. First of all, it is a depleting resource, the more we use it, the more it’s going away, and eventually we’ll have to face the issue of “What do we do know that there’s no more fossil fuels?”. And the other thing is, all the carbon dioxides and pollutants it’s [fossil fuels] sending in the atmosphere is causing climate change. I know a lot of people want to deny it, but it’s there. Ten or fifteen years ago, people just thought the environment was heating up naturally, but now there’s cold, hard evidence that there is climate change.

Q: Do you think it’s too late to help the environment considering how much damage we’ve already done?

A: There is a lot of damage that might be hard to fix, but I think that we’re in the middle of causing the damage, so even if we just gradually start coming off of doing a lot of damage, there’s a lot of things individuals can do to stop polluting and harming the environment. We have been using fossil fuels for a couple hundred years now, and we could probably continue using them for at least another hundred years, so if we start switching now, before it’s too late, I think we could definitely make an impact and fix some damage.

Q: What do you recommend someone do if they want to help the environment?

A: There are a lot of clubs at Jefferson, and each club does something different. Environmental Impact Club (EIC) has a lot of small committees that handle things like recycling and teaching younger kids about environmental problems. There’s also Environmental Resource Club (ERC), which does fun projects that help you learn about these issues. Outside of that, making small differences in their daily life is something they can definitely do, whether it be wearing a sweater instead of turning the heat up, or carpool and using public transportation. There’s also a lot of community clubs. So, just finding community clubs and getting a group of people to do things together outside of school can really help.”

Q: Climate change is obviously a very pressing issue, so why do you think there isn’t that much concern about it right now?

A: You don’t see the effects of climate change on a day-to-day basis. A lot of people, especially if you’re a working adult, will drive to work and, on the way, see a lot of traffic, so the problem affects them on a day-to-day basis. But climate change in general doesn’t affect people in their everyday lives. Over a couple of years they might see that the summers are warmer, but even then they’ll just turn up the AC. They just don’t see climate change on a global scale. And if you focus on just one person’s life, you’re not going to see the effects of it on their lives. Another reason is that a lot of people think that even if they start recycling or buying organic food, they’re not making that much of a difference. So they think ‘What the point?’, and they think ‘Why do I need to do it if it doesn’t make a big impact?’.

Q: Are you going to pursue this in the future?