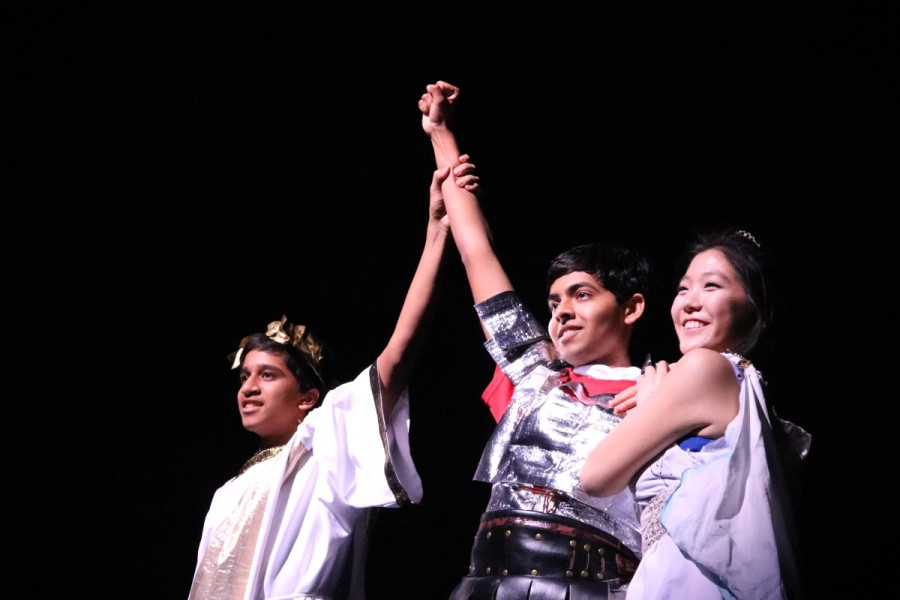 With their first time on the stage, Latin Club puts on a powerful performance with the help of junior Akshay Balaji (left), junior Prathik Naidu (middle) and senior Irene Song (right).

With over 100 acts and counting from Namaste Couples to Asian Awareness Club, iNite (International Night) prevails as the largest high school run cultural event in the country, gathering the Jefferson community together for a highly-anticipated night of cultural dances and performances.

“One reason iNite is so highly anticipated by TJ students is that there’s so many people,” senior Roman Kasparian said. “It’s just such a huge event that if you’re not in iNite, you at least still have close friends that are in it. I think TJ’s just a cultural school. We have a lot of cultural backgrounds and it’s just really cool to see them all.”

This year’s event especially lended itself towards diversity with its inclusion of four new acts by the Jewish Culture Club, Color Guard, Russian Honor Society, and Latin Honor Society.

“I was personally part of Latin, and I really think [the new acts] add a new dimension to the show,” senior and Namaste president Dhruv Gupta said. “Before, you’d have the same kinds of acts. Adding these four new acts, as well as removing some of the acts that weren’t adding anything new, and reducing the amount of time that other acts had, really changed how the show went and how it felt. Overall, viewers, I think, had a much better experience.”

These new acts, though without the years of experience that most acts have already acquired, managed to compose their routines by viewing videos of their cultures’ classical dances as well as borrowing from performances the club members had already mastered.

“Most of [Color Guard’s] show comes from the warmups from our actual practices, so it was kind of based off of that,” freshman Kelci Mapili, Color Guard performer, said. “And, we also have had a few extra practices throughout the week to help us prepare for the show.”

For the officers in charge of choreographing and arranging these new performances, integrating these new acts into the iNite program proved to be a stressful but incredibly rewarding experience.

However, Keesing says the preparation always paid off in the end, catering to freshmen and underclassmen who seek guidance for the future.

“When you’re spending all of this time outside of school, you get to meet a lot of club leaders and hang out with them,” Keesing said. “I even got to talk to the upperclassmen about what TJ’s gonna be like in the future, so that was really helpful. Overall, it just gives you more people to know, and that always helps grow the sense of community.”