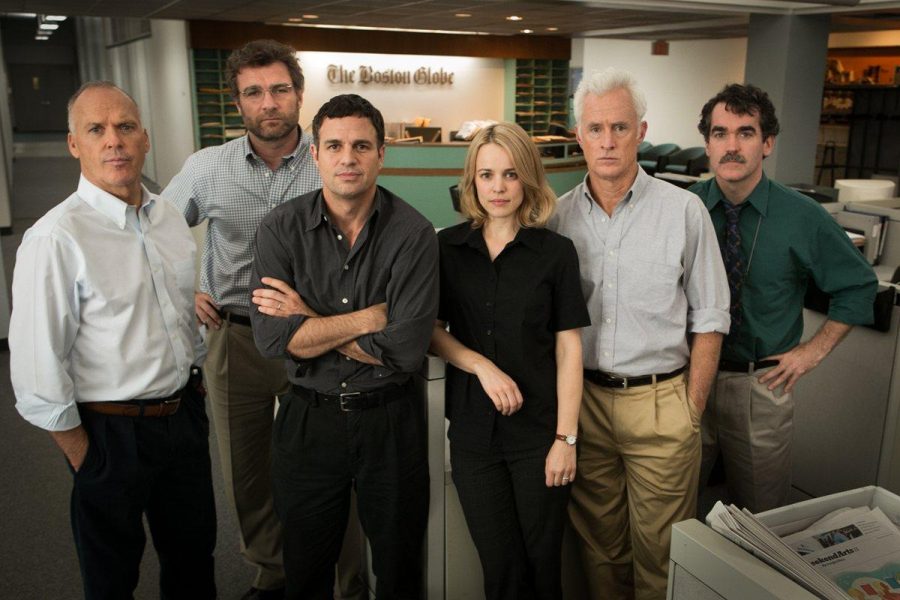 This Oscar awarding-winning film was even highlighted by the President Barack Obama himself.

“And yet it was a movie about journalists spending months meticulously calling sources from landlines, and poring over documents with highlighters and microfiche, chasing the truth even when it was hard, even when it was dangerous,” Obama said during the Toner Prize for Excellence in Political Reporting Ceremony. “And that was the movie that captured the Oscar for best picture.”

Tom McCarthy, director of critically acclaimed films like “The Station Agent”, “The Visitor”, and “Win Win” strikes again with a poignant film adaptation of the Pulitzer Prize winning coverage by the Spotlight team of the Boston Globe in the early 2000’s. The film follows the team’s investigations into the sexual abuse that permeated throughout the Catholic Church/ Nominated a total of six times, “Spotlight” won the Academy Award for Best Picture and Best Original Screenplay on Feb. 28, 2016.

The plot of the film begins with the arrival of the newly-hired editor named Marty Baron, a seemingly stoic man with a determination to shake things up at The Boston Globe. An opportunity immediately rises after Baron meets the editor of the Spotlight team Walter “Robby” Robinson. Robinson explains that the Spotlight team typically covers investigative stories that take months to fully research and publish. After reading a column by a Boston Globe journalist about sexual assault cases brought against , Baron approaches the team with an idea to cover Mitchell Garabedian and his suit against the Church. At first apprehensive, Robinson refused to cover the story; however, after Baron repeatedly applies to Robinson to get to the bottom of the story, Robinson accepts and reviews the case with the other members of the Spotlight team (Michael Rezendes, Sacha Pfeiffer, Ben Bradlee Jr., and Matt Carroll).
As members of the Spotlight story review reassignments within the Catholic Church, they start to uncover a story deeper than they had ever imagined: a story about an extensive string of sexual abuse cases by hundreds of priests in the Catholic Church. They uncovered a system that not only turned the other cheek to these assaults, but actually helped cover for these priests by reassigning them to different districts. Now, they will have to prove it to the public and put these assaults to an end once and for all.

The movie “Spotlight” effectively leads the audience through an informational documentary while keeping the audience at the edge of their seats. Every second of the film is shocking and riveting, gripping the watcher by her heartstrings. Every second brings a new side of the conflict, from the church reassignment books in the basement to the secret documents suspiciously kept on seal by the Catholic Church. “Spotlight” is an extraordinarily beautiful Hollywood movie that managed to value the cold hard facts above dramatic storytelling and still encaptures the audience at every step of the way.