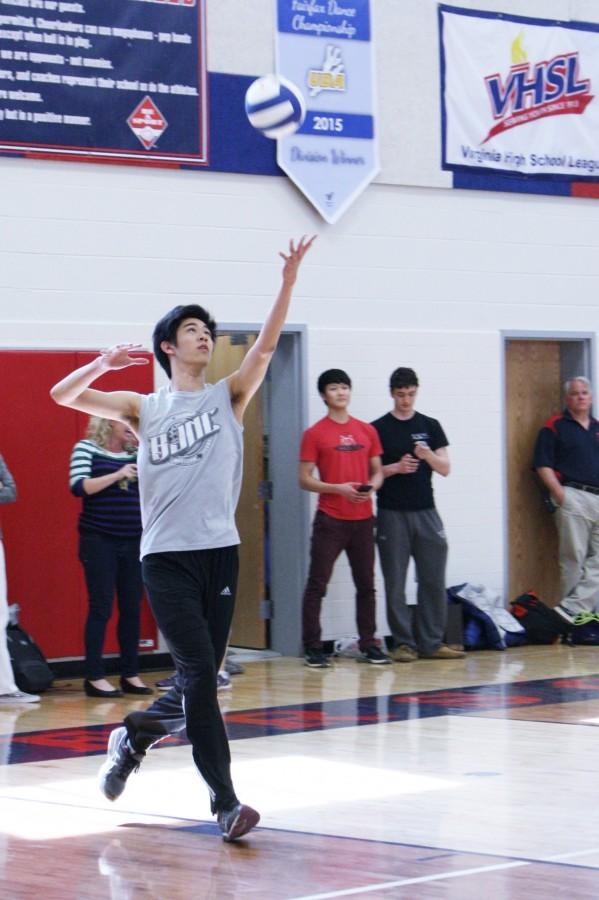 Senior Andrew Li sets a volleyball up to serve.

Beating the clock, Sprinterz.weebly.com secured two points winning the final match of the volleyball March Mayhem Tournament. The team, made up of seniors Andrew Li, Wills Song, Charlie Guan, Mark Prettyman, and Jesse Cai, secured their victory against their opponents, a team made up of juniors, during the annual Winter Pep Rally.

Their blog, sprinterz.weebly.com, inspired the team’s name, since five of their six members are a part of the track team.

The pep rally garnered less attention than previous years with only 288 people attending, and subsequently there was less cheering during the event.

“It’s not as [exciting] as usual. Last year I came, it was a lot more [exciting],” junior Pallavi Bhave said. “There was so many more people and people were cheering.”

However that didn’t stop the festivities from going into full swing like previous years and from other students like freshman Jenny Pruitt from enjoying it.

“It’s kind of smaller than I thought it would be, honestly, but it was pretty fun. I play volleyball so it was fun watching other people play,” Pruitt said.

The event kicked off with the senior team playing against their junior counterparts, and after being tied for the majority of the game, Sprinterz.weebly.com finished their close match, 21-19.

“I feel like we could’ve done a lot better,” Li said. “Our strategy was just put the ball in, if we can get it to me, I’ll put it down.”

After the first game, the faculty team – made up of math teachers, Ms. Emmons, Dr. Jivari Scavotto, and Mr. Carey; P.E. teachers, Ms. Davis and Ms. Stile; history teacher, Mr. Bourjaily; and computer science teacher, Mr. Rudwick – started warming up, while winter and spring sport athletes circled the gym floor. The sports included swim and dive, lacrosse, baseball, gymnastics who cartwheeled down the sidelines, and more. Then, closing off this year’s pep rally, the senior team finished the game against the faculty team, 21-12.

“Although I didn’t get any chocolate, [the pep rally] was pretty nice,” sophomore Ann Mathew said. “Since it was a close match, it was pretty fun to watch the game.”