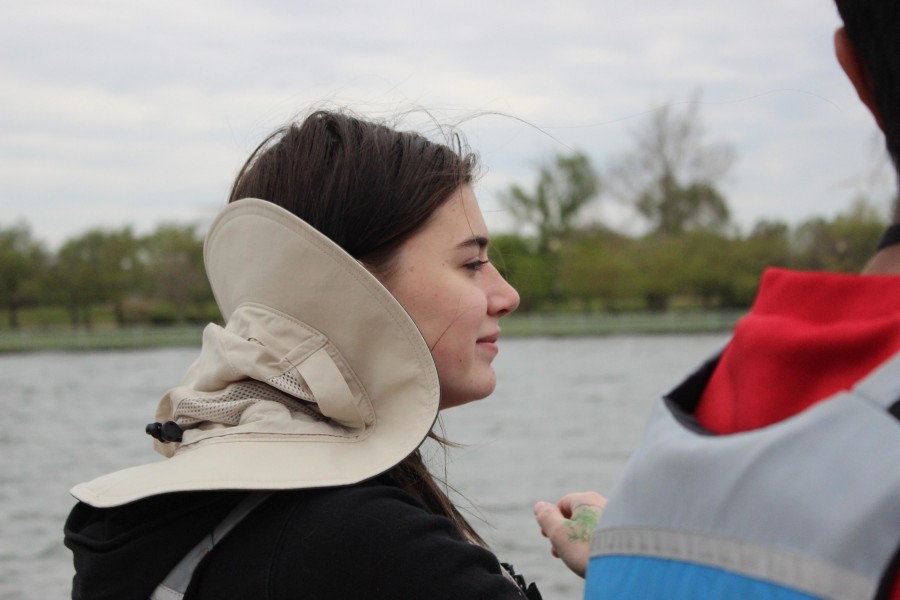 Junior Klara Vertes surveys the landscape from the back of the boat.

One student reached her hand into the cold bucket of river water. She moved her hand towards the shiny, medium-sized fish in the corner, too timid to grab it. Another student grabbed the perch by its yellow-green belly, holding it out of the water. The class watched the fish’s gills open and close, then the Chesapeake Bay Foundation (CBF) guide explained that the bright red layer under the fish’s gills allow it to absorb dissolved oxygen. The class watched with interest, then some took turns gently holding the fish for a few seconds.

As the students learned about fish, fauna and algal formations on their field trip, they also furthered the CBF’s environmental goals by contributing to their water quality data on the Potomac River on Monday, April 11, 2016.

Why did the class embark on the educational program? “To study the Chesapeake Bay [watershed] by looking at all the different numbers associated with marine health like dissolved oxygen,” said junior Victor Galov. The class split up into groups to test as many different aspects of water quality as possible, from phosphate levels to turbidity to colored dissolved organic materials. The group even used a SONAR to evaluate the depth of each of the three testing sites, which included one point on the Anacostia River, another on the Potomac River and a spot near the shore of the Blue Plaines Water Treatment Facility.

“We also tested things like temperature, you don’t want it to be too hot [or] too cold,” Galov said. To evaluate the effects of water quality on the fish, the class discussed the way in which each different test indicated the health of its water.

After the students had recorded data at each site, they helped haul fishing nets–which are typically illegal in Washington, D.C.–onto the boat. The CBF had obtained a scientific permit so that they could use the nets for educational purposes.

“We didn’t catch many fish, which is kind of sad,” Galov said. According to him, the leaders of the program mentioned that “they usually caught like 8-10 species of fish, but we only caught two species with one specimen from each.” After the first net only yielded one shiner and one yellow perch, the group put the net back in the water, but the net returned empty again, save for a few Asiatic “mystery snails.”

Overall, though, Galov enjoyed the day of field work, saying, “[The field trip] was a lot of fun. It was pretty lit.”