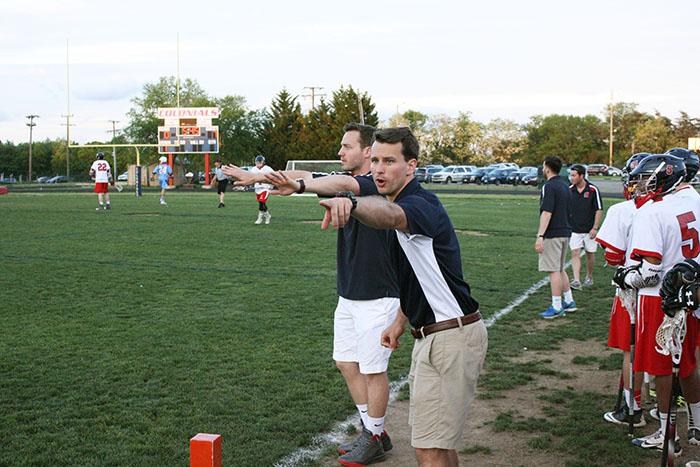 Head Coach Jackson Kibler coaches from the sidelines in a lacrosse game. He has been the head coach for two seasons.

Coach Jackson Kibler is the Head Coach of both the JV and Varsity Lacrosse teams. He played lacrosse throughout high school, winning two State Championships, and college, at Christopher Newport University. He coaches the teams six days a week, at Varsity practices Monday through Saturday and JV practices Monday through Friday, holding captains practices on Saturdays. Many players enjoy being coached by Coach Kibler, because according to Johnathan Huynh, a JV freshman goalie, “he always knows that we can improve and he knows when we’re having a bad day and he can recognize what we definitely need to work on. He actually does demonstrations [to help us improve]. For example, he would use my stick and just show us basic moves, so he would move around, throw the ball, sprint, everything like that.”

Q & A with Coach Kibler:

Have you played LAX and if so, for how long?

Yes, I started playing lacrosse my freshman year of high school at Oakton High School and I played throughout college.

My entire coaching career has been at TJ. I’ve coached for the last four years and the last two I’ve been the head coach.

What are the best parts of coaching?

The best parts of coaching are just staying into the game that I’ve always loved. I mean, after college you kind of get into your work career and you kind of lose touch of those things you used to love, and so it makes my day go by faster. I love being with the kids, this is a great group of guys, and they definitely make my day better everyday, so I would say just the players themselves and the sport.