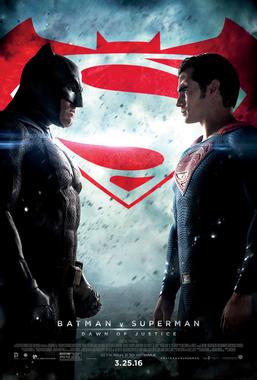 Batman and Superman face off in the release poster, which is visually reminiscent of the poster for Marvel's upcoming and much-hyped "Captain America: Civil War."

Nobody took the opportunity to push Lex Luthor off a building. It would have been so easy. He stood there with his back to the edge for a long time, threatening Lois Lane and then using her as Superman-bait. Alas, the climax of “Batman v Superman” continued.

“Batman v Superman” is a fight between human and alien, or as Lex Luthor (Jesse Eisenberg) would put it, man and God. The film begins with Bruce Wayne (Ben Affleck) watching powerless as a building collapse caused by one of Superman’s (Henry Cavill) fights kills his own employees. Lex Luthor, even more actively anti-Superman (he’s trying to stockpile kryptonite to use against Superman if things get out of hand), takes advantage of Batman’s doubt to manipulate them into fighting. The exact progression of the plot is fairly confusing, but essentially, tensions rise between Batman and Superman both in and out of costume, and Lex Luthor forces them to fight to the death. Eisenberg’s Luthor is creepy, egotistical, and constantly spouting pretentious philosophy about God and morality. If God is all powerful, he cannot be all good, and if he is all good, he cannot be all powerful. He’s casting Superman as God, but somehow also himself.

The soundtrack, composed by Hans Zimmer and Junkie XL, was without a doubt the most enjoyable part of the film. Even in an over-dramatic shot of Lex Luthor’s face, even in an over-extended car chase, the music was genuinely enthralling. Lex Luthor’s theme, “The Red Capes Are Coming,” particularly well reflects his violent, egomaniacal nature, and the Wonder Woman theme sets the mood for her whole appearance. The whole thing is an album on Spotify. It’d make an interesting, if dramatic, study playlist.

The film confirmed several negative stereotypes about action movies. Lois Lane is subjected to unnecessary nudity. Wonder Woman’s costume and moves are bizarrely sexualized. There are long, confusing fight scenes that don’t contribute to the plot. Some may say that it falls short of the “Avengers” series as a crossover- but this is DC Comics, not Marvel. For others, the actor performances made up for the plot shortfallings. If music makes a movie for you and you want to see your most benign crossover fanfiction on the big screen, Batman v Superman is worth a look.