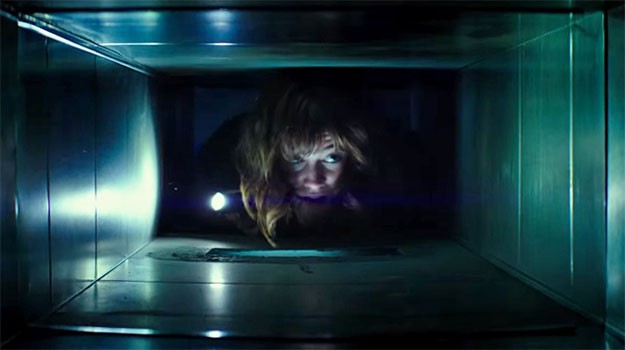 Photo courtesy of www.theverge.com. Michelle, played by actress Mary Elizabeth Winstead, crawls through the ventilation shaft of the underground bunker to try and repair the air filtration unit. 10 Cloverfield Lane was released on Friday, March 25, and was well-received by the public.

Filmmaker Dan Trachtenberg’s new science fiction thriller, “10 Cloverfield Lane,” keeps viewers interested with a well-crafted story, unexpected plot twists and dynamic characters. The website Rotten Tomatoes describes it as “smart, solidly crafted, and palpably tense,” and the movie has an overall 90 percent rating based on 201 reviews on the website.

The movie starts off by showing actress Mary Elizabeth Winstead, who plays Michelle, packing all her belongings and getting into her car to drive away from the city and into rural farmland. As she drives she receives multiple calls from her husband, and it is revealed that she has left their apartment due to a “lover’s spat.” She rejects his calls, and as she continues to drive, her car is hit by a truck and she is knocked unconscious. When she regains consciousness, she is trapped in a room.

Later she meets Howard, played by John Goodman, who tells her that he rescued her from the crash site and brought her to his underground bunker. He also tells her that an attack on the surface has contaminated the air and made it toxic. Michelle doesn’t quite believe him and makes various attempts to try and escape. A man named Emmett, played by John Gallagher Jr., is also in the bunker with them and the two soon become friends.

The best part of this movie is that Michelle is a “smart” character, and I found myself commending her for being able to create strategies and execute plans with only minutes to do so. As a horror movie fanatic, I’ve often been disappointed when characters are ignorant and don’t make good decisions. Granted, it’s often to contribute to the plot, but it can get annoying when characters trip while running away from the villain in almost every horror movie.

Another commendable aspect of the movie is that it doesn’t get boring. There are only three characters in the entire one hour and 46 minute movie, with appearances of other characters for only seconds on-screen, but so many things are revealed about Howard that viewers are kept sitting at the edge of the seat, flipping between emotions of love and hate for him each time Michelle finds out something about him.

I would recommend 10 Cloverfield Lane to anyone who enjoys mystery and suspense, as the movie has a plot twist that even seasoned movie-watchers can’t guess by just watching the trailer. The end of the movie also leaves off at a cliff-hanger, leaving viewers wanting to learn more about what happens to Michelle and the whole world.