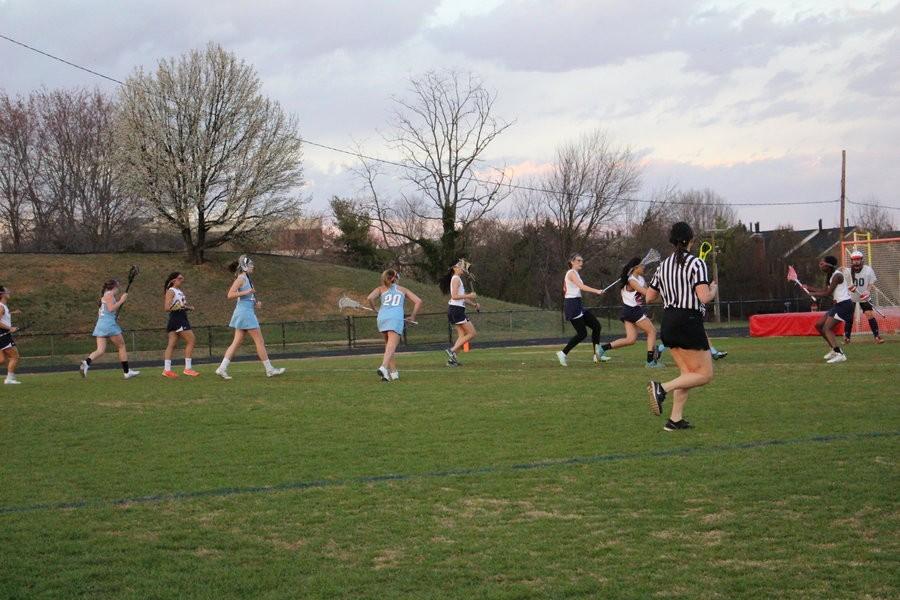 Freshman Manna Haile, defense, stands in front of Jefferson's goal against a Marshall player during the girls JV lacrosse game on March 17.

Jefferson’s girls JV lacrosse team has been preparing for the full season ahead of them. Their first scrimmage was against Annandale High School on March 9, where the team won with a score of 7-4, followed up by the second scrimmage on March 11 against South Lakes High School with a score of 4-9. The team’s first official game was on March 17 against Marshall High School.

“I think we have a lot of potential as a team. We have a lot of new freshmen, which is good since there’s more room for improvement,” sophomore Anna Lulushi, midfield, said. “I think that we can become a really strong team with a lot of hard work and dedication.”

The athletes are working to improve their skills as individual players, but also as a team. Knowing how their teammates work can increase the number of wins for Jefferson.

“For the full season, I really want our team to learn how to communicate better and work together as a team.” Lulushi said. “In general, I think stick skills are something that everyone can improve on, since they can never be too good.”

The first official game on March 17 ended with a score of 7-13. Many players began to understand each other’s playing style during the scrimmages, which resulted in a more close-knit team for the games.

“My teammates are the best. They’re all really nice and supportive, especially the sophomores. They’re role model figures that I look up to. They help out, not just lacrosse but also with schoolwork and personal things and they really bond with us freshmen,” freshman Sheral Patel, attack and defense, said.

Within the first 10 minutes, Jefferson started out strong, leading with a score of 4-3. However, as the match progressed, the players became more tired and began losing to Marshall.

“We did play our best, and Marshall got a little stronger, but I think we did great as a team,” Patel said. “We’ve been practicing for one to two hours everyday for the past few weeks, and during practices we try to get the most out of time we have.”

The team’s next game will be against Washington-Lee High School on March 30 at 6:00pm.