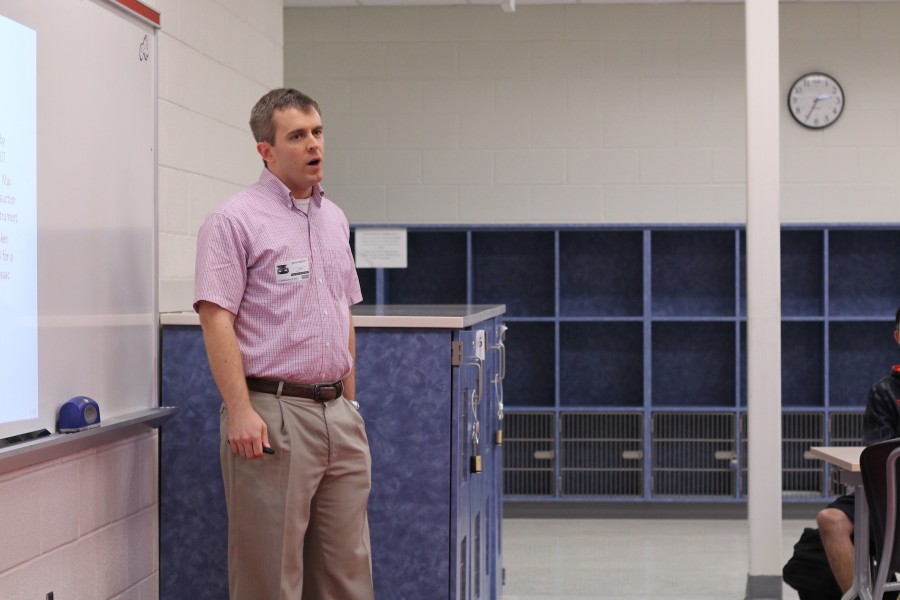 Class of 2000 alumnus Sean Hardesty gives a talk to students about optimizing violin design on March 18 in the Curie Commons.

The Jefferson physics team hosted a talk where Jefferson and California Institute of Technology (Caltech) alumnus Sean Hardesty explained the physics behind violin design. On March 18 during A block, Hardesty focused on research he has done on optimizing violin design and the mathematical functions used in solving acoustics problems. During B block, Hardesty demonstrated sounds with violins, and students were encouraged to bring their own violins.

“The research he’s presenting is on optimizing the design of a violin, so that it fits the right tones and matches the way the human ear hears the sounds,” senior and physics team captain Ross Dempsey said.

Hardesty discussed using acoustic transfer functions, which link sound levels at their source to sound levels at a remote location called the receiver. He had worked on a function that would be efficient in locating places to make adjustments to a violin to make it sound better. The function would also help make violins identical to each other, which is difficult to do because there are slight variations in each piece of wood used for constructing violins.

“He looks into how you shape the violin so when you play a note, the acoustic transfer function is optimized,” Dempsey said. “So, you get the sounds that are the most pleasing.”

The main focus of Hardesty’s research, however, is using synthetic materials such as three dimensional (3D) printing to make violins more consistent.

“I think 3D printing holds a lot of promise as new materials are being developed,” Hardesty said. “The dream then is to figure out what a player likes, design an instrument suited exactly to that player, and 3D print it. If it gets lost or broken, we can print another one that is exactly the same.”

The fact that Hardesty once attended Jefferson and was Dr. Dell’s student helped connect his talk to the those who attended the event.

“For people to see he was here, and went on to Caltech to do this kind of research, you can see what more basic physics he learned here and it might help you to do more later on,” Dempsey said.

The talk was informational for the physics team, since they have less experience with acoustics.

“It is good for people to see an application of [acoustics], and wave theory in general, something we haven’t covered as much in the physics team,” Dempsey said.

The physics team also plans to host another speaker to discuss gravitational wave theory later in the year, and encourages students interested in physics to attend.

“It’s a great way to see some cool applications of science,” Dempsey said. “They show you how science is useful in everyday things, and it’s good if you understand the physics behind it too.”