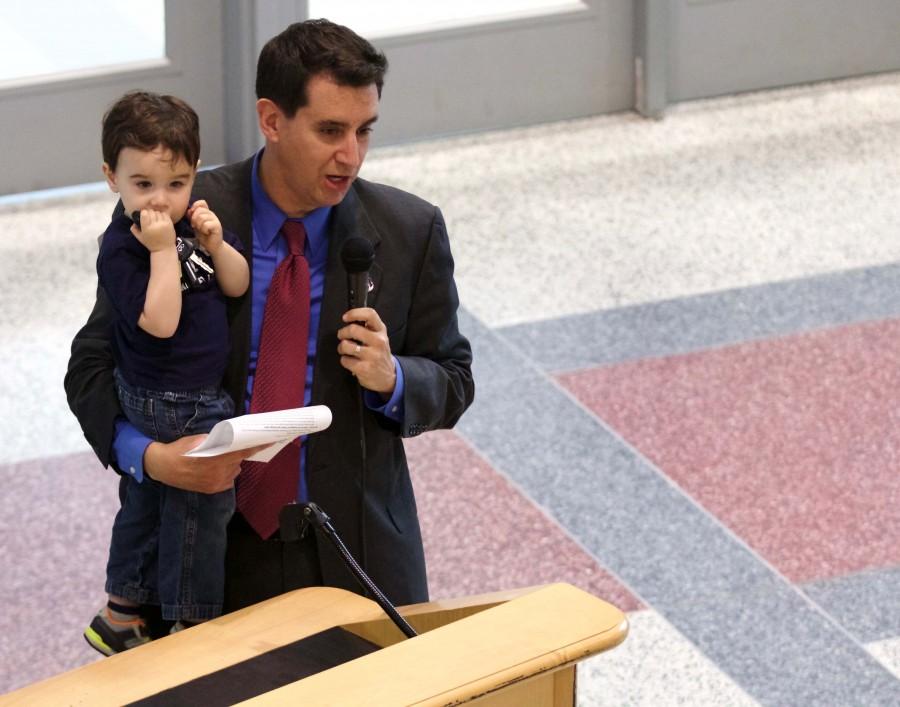 Holding his son Luke, Dr. Evan Glazer gives opening remarks at the dome opening ceremony on March 10. Glazer has served as principal of TJHSST for the last ten years.

After a transformative ten years, Principal Evan Glazer announced on March 14 that the 2016-2017 school year will be his last at Jefferson. He will be relocating to Avenues, the World School, a Pre-K to 12 school with campuses all over the world.

“The decision to leave TJ is very difficult for me because I love the people, culture, and mission of our school,” Glazer said in an e-Notify email to the Jefferson community today at 5:02pm. “However, every school needs fresh ideas to improve its vision and address challenges in meaningful ways.”

Fortunately, as the head of the New York City campus, Glazer will have the opportunity to lead a new mission in international education of students of all ages. He believes that mid-2017 will be the right time to explore this mission since the renovations will be complete. Although many students and faculty are proud of Glazer’s plans of extended outreach, they will still miss the one and only “D-Glaze.”

“I’m very happy for him and it sounds like an incredible opportunity. Dr. Glazer has always impressed me with his support of counselors and the role we play at TJ,” school counselor Sean Burke said. “Whenever I’ve needed his support or advice, he’s always made himself readily available. I always appreciate his willingness to find time in his hectic schedule for me. He is always willing to talk about an issue and explain his thinking.”

“Dr. Glazer truly was a wonderful principal during my time at TJ,” junior Aaron Gu said. “The ever-positive ‘Goooooo Colonials!’ will be missed greatly.”

Along with being principal for ten years, he also worked closely with the students and teachers as an Algebra 2 teacher. Many times he could be spotted stopped in the hallways talking to students, asking about their days.

“I think Dr. Glazer was definitely different from any other principals or administrators I’ve come across because he gets so close to his students,” senior Jennifer Lee said. “By being a teacher in addition to being a principal, he got to know his students on a personal level. Not many principals would be willing to go that extra mile for their students.”

Until his departure, Glazer remains committed to the responsibilities he has at Jefferson and hopes to leave the school a thriving community.