Homage to Miyazaki & Beyond: 5 Centimeters Per Second 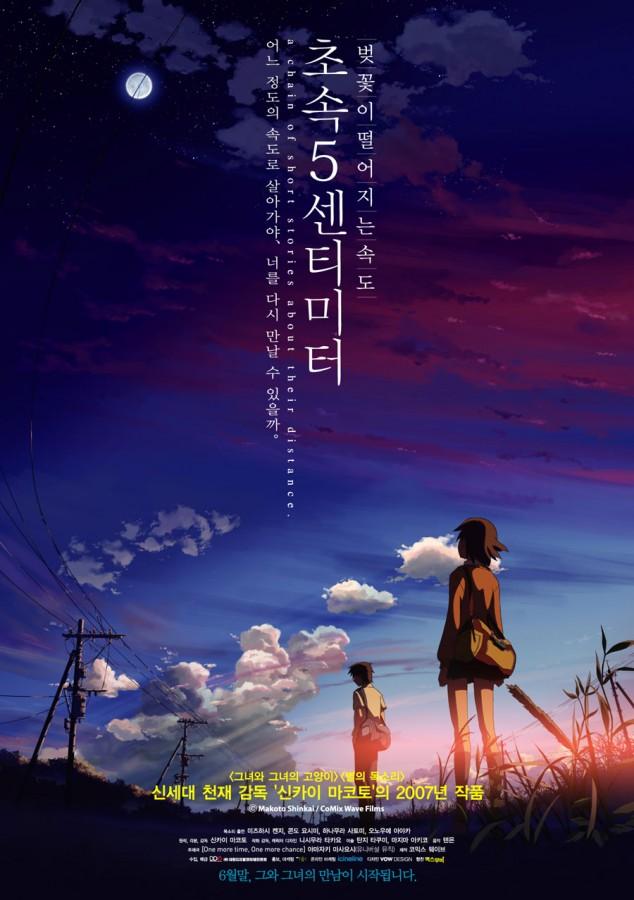 Photo courtesy of www.movie.naver.com. "5 Centimeters Per Second" is a 2007 Japanese animation.

It has been years since I’ve watched “5 Centimeters Per Second,” but I still remember the nostalgic tone of the film that still comes back to my mind.

This film, directed by Makoto Shinkai, is not one that has an extremely memorable plot. It is a simple love story–the short runtime of one hour and three minutes shows that this film does not focus on the storyline. Rather, it is the combination of music and illustration that truly brings light into the film.

There is a clear difference between Shinkai’s film and the ones produced by Studio Ghibli. While Hayao Miyazaki is a master of blending the reality and the fantasy into a seamless story, Shinkai shows his skill in depicting the world as real as he possibly could. The illustrations in his films are incredibly detailed–the intricate design of each scene is one of the greatest elements of “5 Centimeters Per Second” that distinguish itself from other animation films.

However, if I had the choice of identifying the best part about the movie, I would, without doubt, choose the music. The sentimental tone of the film is greatly conveyed by the sound of the piano that incorporates into the story–I could argue that the main reason that I still remember this film is not due to the plot but the incredible music.

I must admit that Shinkai’s narrative does not equal the fantastical universe that Miyazaki creates in his masterpieces. Nevertheless, “5 Centimeters Per Second” is definitely a film that I would recommend for anyone who has experienced their first love once in their lives and reminisce the heartfelt memories of childhood in an increasingly distanced and isolated world. Hopefully, I can witness an evolution in Shinkai’s storytelling in his upcoming film, “My Name,” which is to be released in Japan this year.