The anomaly that is this winter brings new perspectives 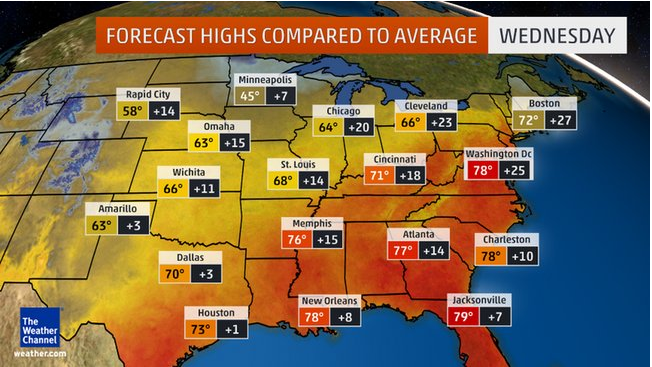 Temperatures are expected to heat up across the country this week of March 8th. The D.C. area in particular is projected to reach temperatures of 78 degrees Fahrenheit, 25 degrees greater than average.

This winter has noticeably been much warmer than past years. The week of March 7-13, temperatures are expected to reach 78 degrees Fahrenheit – weather you’d expect to see during the arrival of spring or the onset of fall. Other than the infamous “Snowzilla,” that struck the Northeast in late Jan. and covered the region in feet of snow, the weather has mainly stayed mild. In fact, according to the “Time” magazine, 2016 is expected to be the warmest year on record. While I’ve been enjoying the relatively pleasant weather these past months, there are pros and cons to having a milder winter season.

First off, when I think of past winters, I recall the many snow storms that resulted in weeks of school being canceled, such as the great snowstorm of 2010. More recently, I remember the winter of 2014, which according to the Washington Post, caused Fairfax County Public Schools (FCPS) to have 11 snow days, although the school year was extended by a few days much to the dismay of students. This year, with the onslaught of Snowzilla, school was canceled for a week and a half in late Jan. and early Feb. Despite the many consecutive snow days that Snowzilla had brought, I was disappointed to see that all the snow had melted within a couple of days. While we did have a number of cancellations due to the snow, we haven’t received much snowy precipitation since then, with a few exceptions of sleet and icy rain.

Obviously, weather is uncontrollable, but if I had the power, I’d have many snow days spaced out throughout the winter such as in 2014, rather than have a big blizzard dump a bunch of snow, leave behind a week of no school, but then hardly have any snow days for the remainder of the season. I miss the ‘good ol’ times’ when we had at least one snow day a week for many consecutive weeks in the winter. Nonetheless, I’ll never take for granted the glorious week and a half of snow days that we had this year.

Moreover, when I think of winter, I recall cloudy skies, cold gusts of wind, and lingering ice on the ground. I’d wear my heaviest winter parka on the way to school, bracing myself for the below 10 degree weather. Nowadays, a mild 50 degree average is the norm. The sky is usually clear, rivaling the bright blue skies of spring. Although there are the occasional days when I’m shivering on the way to the trailers as gust of winds permeate through my jacket, the sky above usually remains a calm blue. I personally am glad to see the more sunny skies, as winter has always been, well, a more gloomy time for me. Maybe it’s because of the lack of sunlight and gloomy skies that prevailed throughout the season in previous years. However, nowadays, I find myself feeling much more upbeat as I look up towards the sky and feel the sunlight washing over me with its soothing light.

While this winter has been much brighter and milder than past years, it’s always interesting to experience unusual seasonal weather. With the short winter season this year, spring will arrive early in no time (looking at you, groundhog Punxsutawney Phil). The onset of warmer weather is already a sure sign that the seasons are beginning to transition. Although some may be ready to get rid of their parkas and gradually bring out the shorts and cardigans, I just want to enjoy the remaining weeks of the season, where I can be reminded that despite the unusual weather, winter is still here, after all.