At the VHSL 5A State Championships, Jefferson Runners Reflect on Training and Preparation 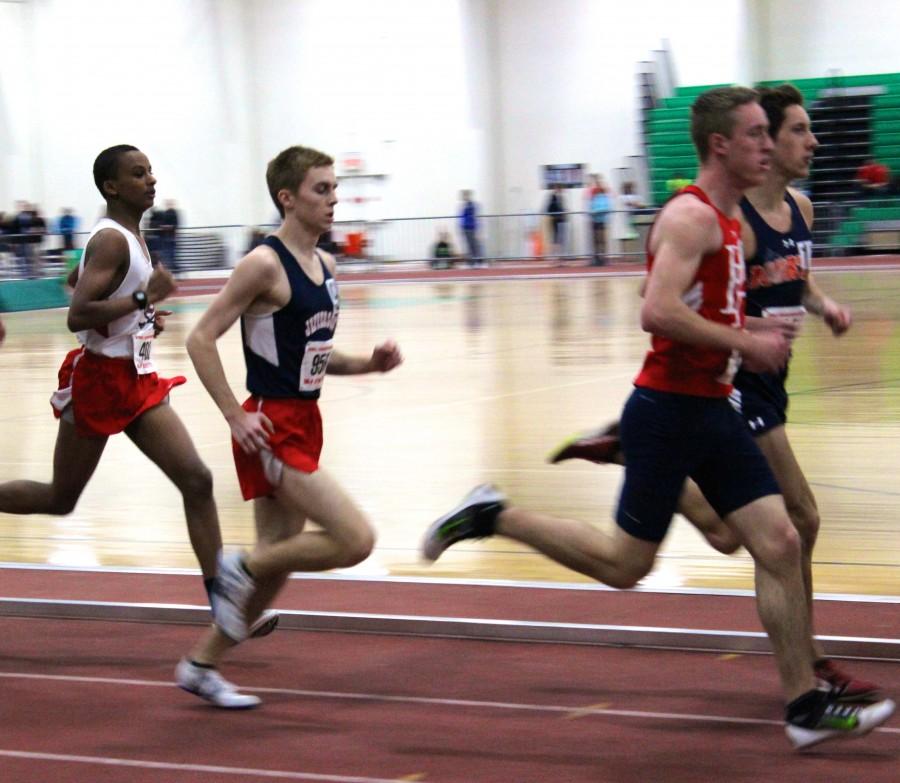 Senior distance runner Nate Foss hung back in the early laps, then overcame his competitors to win third overall in the 1600 meter race.

The Boo Williams Sportsplex in Hampton, Va. buzzed with nervous energy as spectators weaved in and out of the dense crowd beside the indoor track, runners stretched and jogged in the spring weather outside and athletes gathered to watch the races broadcast live inside the practice gym. Almost all participants at the high-stakes 5A and 6A VHSL State Championships went to cheer on their teammates when they weren’t preparing for their races themselves.

Often at track meets, though, the team areas are full of athletes deep in concentration, waiting for their races, chewing energy bars, listening to music or resting up. The longest event at any track and field meet, the 3200 meter run, takes less than fourteen minutes to complete, but athletes prepare in many different ways and for many weeks before they can expect to do well.

The members of the Jefferson track team whose season best times or regional performances had qualified them for States had been practicing non-stop for over three months before the weekend of Feb. 26 to 27. According to senior Alex Hoganson, who ran in the boys’ 4x800m relay and placed 8th overall in the 5A State division of the boys’ 1000-meter race, distance practices alternate between six to ten mile “long runs,” slower five to seven mile “easy runs” and workouts.

“Workouts are the real meat of practice,” he said. “It’s when you get better. The goal is to improve our base strength and speed so that we can run faster for longer.”

Junior Nikita Sawant, a member of the girls’ distance team, described how she and her teammates practice. “We have workouts twice a week and we do long runs to build up our endurance,” she said.

Senior sprinter Charlie Guan, who placed second in the state for the 55-meter hurdles, worked on his starts to prepare for the competition. “You definitely have to edge your competition out soon, or else you’re going to get crowded out,” he said. From Guan’s perspective, practice is critical for hurdlers. “It’s the one event in track and field that combines not only speed, but technique, coordination, balance and flexibility, so consistent practice is important.”

In addition to the work put in at practice, States runners had to prepare mentally before their races. Hoganson said that he listens to “high-adrenaline” music to keep him focused and ready on race days. According to Hoganson, the playlist to which he listens before races contains “the twelve most straight fire songs known to man,” such as “Remember the Name,” “The Final Countdown” and “Gonna Fly Now.”

Hoganson also mentioned the way in which his thought process during races helps him to push himself. “A big component of preparing for races is visualizing,” he said. “For example, when I’m running an 800, I like to visualize Nate’s back for the first 700 meters and then his side as I pass him in the last 100 meters.”

Runners who were a part of the five total Jefferson relays that made it to States had their own methods of preparation. “We have a team pep talk before our relays and we really support each other,” Sawant said of her 4x400m and 4x800m teammates. She also said that they practice handoffs before their races. Guan, who also ran in the boys’ 4x200m relay along with Jesse Cai, Jonah Casebeer and Akhil Madhiguiri, enjoys the team aspect as well. “I love my teammates. We’re really close friends,” he said. “The team mentality got us through.”