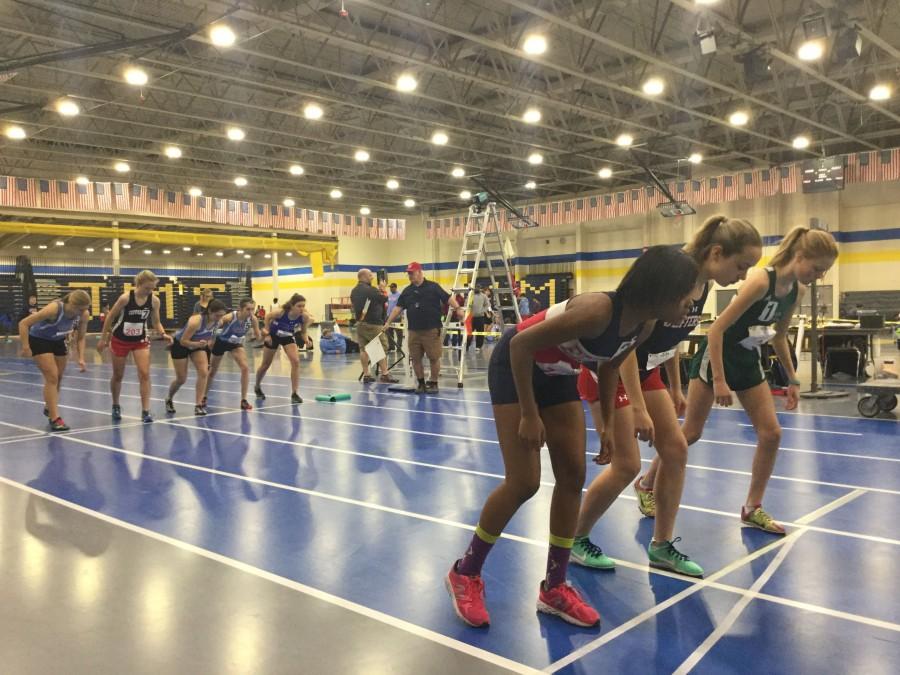 Track athletes line up in preparation for their next event on Day 2 of the Liberty Conference Championships at Thomas Jefferson Middle School.

Hordes of excited parents and siblings crowd the stands to cheer on their school’s indoor track team at the Liberty Conference Championships. The atmosphere is periodically pierced by the sound of gunshots and screaming teammates as the athletes hit the track running, competing in events like the 4x200m relays or the 55m dash.

“Every time we run a relay, after we finish our individual [relay], we run to the sidelines to cheer on whoever’s running next,” senior Claire Dong, member of the Jefferson sprint section of the track team, said.

“It’s pretty exciting, especially for the relays,” senior Nate Foss, member of the Jefferson distance section of the track team, said. “Everyone gets into it, and on the last lap, everyone in the stands [gets] into it. It’s pretty exciting. The athletes are a little bit less excited than the spectators, which is funny.”

Jogging to the background of a cheering audience, athletes prepare for the day by warming up, signing in for their next race, or moving up to the start line adjacent to a large black stopwatch that shows the time, and large burly men recording the athletes’ numbers as they fly past the starting line. With no time to spare, girls’ sprint events are hurried along one after another, followed by the boys’ respective short distance races, with the girls’ returning once again to compete in the 500 and 1000m races. As athletes speed across the finish line, the crowd surges and roars with applause.

Through the tough work and dedication of the Jefferson track coaches, athletes trained competitively through tempo runs, sprint workouts, core work, and more, and were able to break school records and placing well in individual events at the Championship meets on Feb. 11 at Episcopal High School and on Feb. 13 at Thomas Jefferson Middle School. Senior Charlie Guan broke the school record for 55m hurdles at 7.7 seconds on Day 1 of the Conference Championships on Feb. 11. Foss placed third in the boys’ 1000m race, and junior Michael Chang placed first in his heat of the 500m race. Dong, senior Sydney Miller, and sophomores Alynne Cutler and Ashley Lin placed second in their 4x200m relay.

Regardless of their places in their individual events, however, Dong and Cutler are both proud of their personal performance this past season.

“I’ve had PR’s [personal records] this year, and I know Claire and Ashley have had PR’s as well,” Cutler said.

Looking towards what lies ahead, Dong is optimistic about her future in later events.

“I ran my PR at conferences, [and] I’m hoping to break that at regionals,” Dong said.