Jefferson’s new library opens on the second floor, after many months of renovation 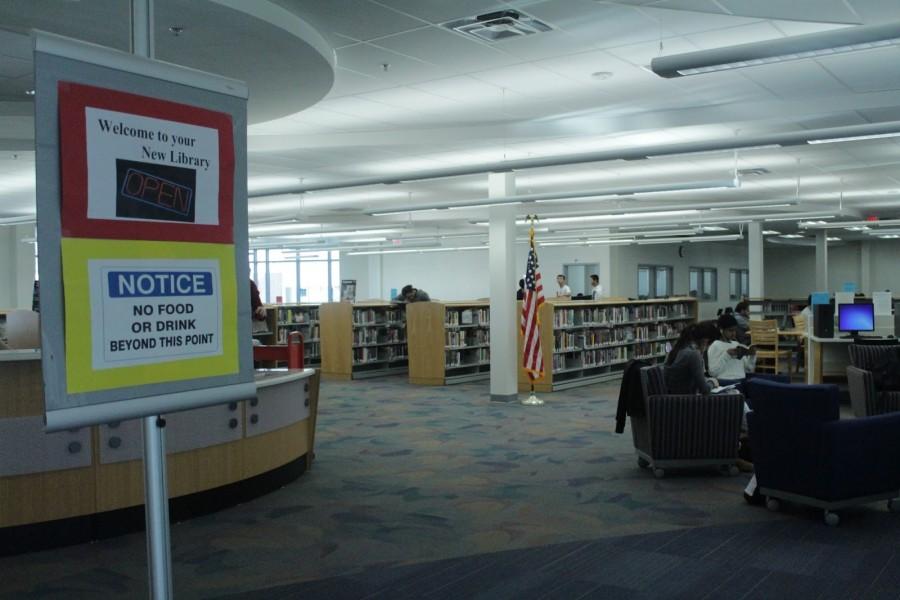 Jefferson students work in the new library during eighth period study hall. On Feb. 18 the library was officially opened for student use.

Among the gradual unveilings of Jefferson’s newly renovated facilities, the new library holds special attention. On Wednesday, Feb. 18, the library was officially open for use by students.

“We had planned to officially open on Wednesday, February 17th.  However, we discovered that a switch necessary to activate the computer access points still needed to be installed into the electrical box,” head librarian Anne Applin said. “We had an unofficial opening on Wednesday with several library classes, then an official opening on Thursday, March 18th.”

Much work was done in preparation for the library opening. The Fairfax County school system library services office played a large role in assisting Jefferson in getting the library ready.

“We had wonderful help from a variety of people.  FCPS warehouse employees and the TJ moving crew under the direction of Mr. Bruce Butler were instrumental with the heavy lifting,” Applin said. “We had volunteers and friends of the library who stopped by and gave us help, including some great National Honor Society (NHS) student volunteers.”

In addition to the new space, there have already been many changes around the library. Librarians have observed significant increases in book checkouts, as well as a more versatile space that allows for many groups of people to work at once.

“Our [book] circulation has grown. We have 80% more books than we used to have,” librarian Katy Oskoui said. “The biggest differences [are] the amount of natural light, much bigger space, and the ability to have multiple groups of people working on different things simultaneously in the space.”

The library has plans for video conferencing with research labs around the world, as well as author visits. The first of these events was held Feb. 19.

“We hope to video conference with anywhere in the world, and have an audience here in the library to communicate back and forth in real time,” Oskoui said. “We [had] an event this morning. We had 78 IBET students in here all at the same time Skyping with a presenter.”

The opening of the library also opens many new learning opportunities for Jefferson students and staff.

“The focus on intense, high-level research skills that we help students develop here is a critical part of TJ’s learning environment, and this facility better helps us to accommodate all those things,” Oskoui said.

For many, the library opening is an important development for the Jefferson community.

“We hope the library will be the heart of TJ. We hope students enjoy the space to read, learn, study, and collaborate.  We hope to continue growing instruction in information literacy skills, so our students will be skilled researchers and savvy consumers of information in college and beyond,” Applin said. “And of course, we hope to continue fostering a love of lifelong reading!”