The Bee-line for Success in Neuroscience 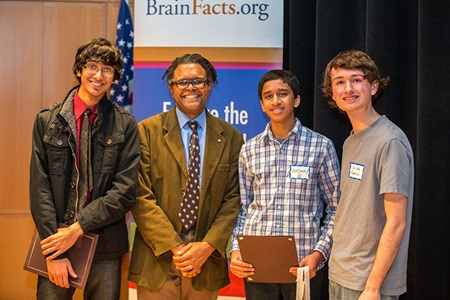 Photo courtesy of the Society of Neuroscience

With the abundance of science tournaments raining in, it’s no surprise the progression towards the International Brain Bee has commenced. The International Brain Bee, a world-wide competition centered on neurobiology, allows competitors to pursue all aspects of the brain through raising levels of competition. The prerequisite for US National competition, the DC Chapter Bee, took place on February 3rd, and proceeded similarly to a Spelling Bee. During the event, eighteen competitors advanced through eight five-question rounds that gradually increased in difficulty. Then, a ninth, survival round of questions began until the participant with the highest number of correct answers prevailed as the representative for the national level of competition.

In order to participate, students partook in a hoard of examinations, of which only two students, juniors Shomik Ghose and Akshay Balaji, scored high enough to advance to the DC Chapter Brain Bee. After nine rounds of strenuous competition, Ghose and Balaji triumphed in the culminating round, finishing first and second, respectively.

“There really was no strategy involved; you just had to memorize whatever you could,” DC Bee winner Ghose said. “In fact, it’s basically all memorization, so preparation is everything at levels pre-nationals.”

Because the competition relied so heavily on memorization, Dr. Laura Locklear, the teacher overseeing the team’s selection process, over-prepared participants to ensure success.

“I expected the competition to be a lot harder since Dr. Locklear gave us a hard qualifier test to decide the two TJ representatives,” Balaji said. “I did make silly mistakes with four questions, but I’m still really satisfied with how I performed.”

Overall, it was agreed that competitive experience was the most vital aspect to aptly performing. Even students who regularly attended the lectures the Neuroscience Society offered for the exam found themselves struggling to even qualify.

“That test required a lot of preparation,” freshman Varshini Babu said. “It was so much material we hadn’t covered in class, and there was no way [anyone] could’ve gotten a decent score without preparation or some kind of knowledge of how hard it was going to be.”

However, the primary reason for participation for some students, as opposed to resting on casual interest, became their strive for improvement since their last Bee.

“Even though I am an officer of the Neuroscience Society, I still find the bee is very difficult in that there is a lot of material to remember, [but] I really do love neuroscience and wanted to see if I would improve from last year’s Brain Bee,” sophomore Rishin Roy said.

As for how to effectively prepare for future years, members of the Neuroscience Society recommend that prospective competitors begin studying early, and refrain from considering the process of team admission as an arduous trial.

“I’ve always been interested in neuroscience, and taking classes such as neurobiology further strengthened my interest,” junior Aditya Jayanti said. “I believe that if you’re actually interested in doing well, as well as interested in the subject of neuroscience itself, it will allow for preparing to seem more like an enjoyable [activity] compared to being like an assignment.”