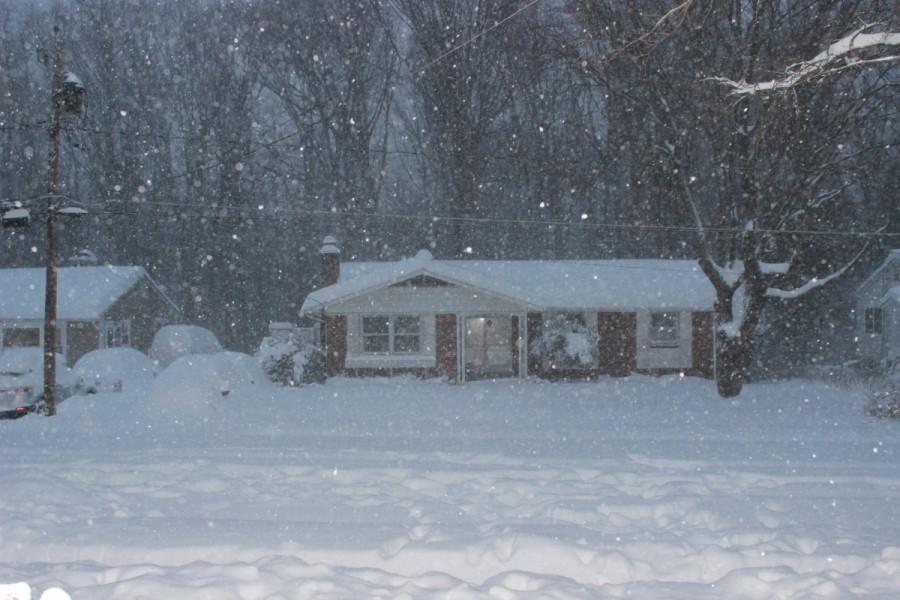 Winter Storm Jonas, which has deposited upwards of 30 inches of snow in the D.C./Metro area, caused FCPS to close schools last week. Many neighborhood roads have not been cleared by snow plows yet.

Winter Storm Jonas, or “Snowzilla”, caused Jefferson students to have unexpected snow days the week before midterms. Jonas, which has caused blizzard warnings to be put in place, has deposited upwards of 24 inches of snow in certain parts of Fairfax County.

Some students spent the days doing fun things they haven’t been able to do recently. Students like senior Sara Warrington spent time watching TV or Netflix, reading for fun, and doing crafts.

“My snow days thus far have mainly consisted of relaxing, sleeping, and spending time with my family,” Warrington said. “We lose power a lot when it snows so my mom and I spent all of Friday morning cooking meals to last a week.”

Other students, such as Junior Melody Chiang, liked having the break from school, even though it was right before midterms. She didn’t think the midterms would be affected unless FCPS was closed Tuesday, Jan. 26 as well.

“This break is pretty much my savior, I’m hoping we get a winter break part two,” Chiang said. “I think at this point, it might have been nice to have time to ask questions in class, but personally, I’m most productive at home. There are some tests and quests that have been postponed by the snow and I don’t know if they’ll be rescheduled or just canceled.”

Students like Warrington think FCPS will be closed Jan. 26, and are concerned as to how the rescheduling of assignments and tests would affect them. Students attending the Model UN conference from Jan. 28-31, for instance, had similar worries as they would miss two days of school and midterms.

“[My AP Government class] was supposed to have a rather large presentation yesterday and a test during our midterm block this week,” Warrington said. “I’m not exactly sure how the schedule will be shifted because I doubt we’ll be back in school Monday, which means something will be moved. The shift in schedule is a huge problem for me – I’m supposed to fly to Orlando Friday afternoon for Dance Team Nationals, and my flight home is Monday night.”

“I feel like it would be a good idea, especially for all the AP kids,” Chiang said. “No matter how many freak snowstorms, hurricanes, and whatnot come, the AP isn’t going to get moved back. It would be nice to have school start earlier so that we have more time to review and the teachers aren’t rushing to cram everything in before the AP.”

However, while such changes wouldn’t affect seniors, as they will be graduating this year, they still have strong opinions on the possible change in the school start time.

“I’ve always enjoyed school after Labor Day, especially because we get out of school so late,” Warrington said. “Whether or not students, teachers, and administrators are for or against it, I doubt we will go back to school early simply because we have always gone back late.”