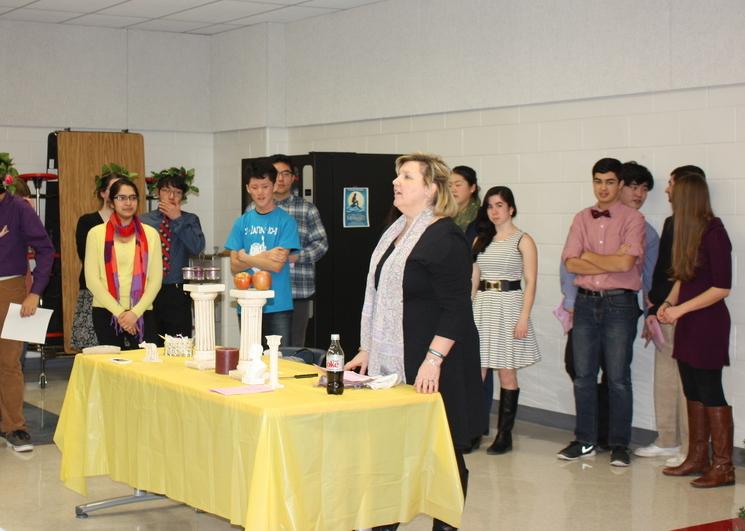 The lights gradually dim in a cafeteria crowded with students.  In midst of the dark, one light flickers.  This is no ordinary candlelight ceremony – it is the Latin Honor Society (LHS) Induction, held this year on Jan. 20.  During the ceremony, LHS members introduced students in their third level of Latin to the society through a series of rituals. Though not sure exactly what to expect of the ceremony, the attendees were in for a riveting and humorous ride through their years of Latin – past, present, and future.

“[The induction] was really about getting to learn about the responsibilities of [joining] the honor society, but it was an interesting and elaborate process,” sophomore and attendee Vanshika Narala said.  “I learned about a lot of different aspects of Latin, but I can’t give away too much because [the ceremony] is top secret.”

Despite the fascinating nature of the induction, its details from year to year remain classified to all but the Latin teachers, officers, and participants.  This is to add an element of surprise for rising inductees every year and make it a unique and exciting experience for all involved.

“We want [the induction] to be special each year for the inductees,” Latin teacher Christine Conklin said.   “It is specifically about Latin and the students’ journeys through their years and levels of the language.”

The induction is a well-adored tradition, as generations of students have been introduced to the society in this manner.  Elements of the ceremony date back to decades prior.

“I wrote the Honor Society Ceremony based upon a Latin Club Initiation ceremony created in the 1950s by a famous Latin teacher in Michigan,” Conklin said.  “We had our first induction ceremony at Jefferson in 2002.”

After joining the society, students have the opportunity to tutor other Latin students and benefit the program and language.

“Once students are inducted, they are officially part of the Latin Honor Society, which is open to students in Latin three and up,” senior and LHS officer Daniel Chae said.  “It is a privilege to be a part of the society, as it serves as a title for being a good student in the community.”

Regardless of level of Latin or officer position, all induction attendees resonate with one unspoken idea: their love of both the classics and of the language, which will stay with them through their years in the society and at Jefferson.

“Latin is a treasure of learning,” Conklin said.  “Everyone is brought together in shared learning and knowledge of the Latin language and ancient Romans, through culture, history and mythology.  All Latin students form a special community.”