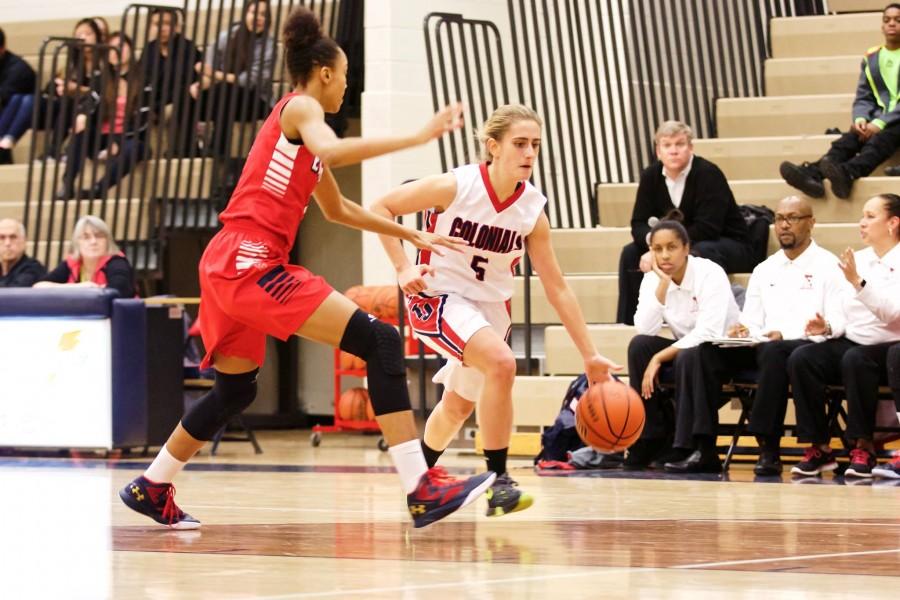 Junior Dana Scheetz makes her way across the court at the doubleheader against Edison High School. The games took place at Jefferson on Jan. 15

The highly anticipated girls varsity basketball home game was the first part of the doubleheader, before the varsity boys game, leading to the senior sockhop. On Jan. 15, the Jefferson team lost 32-67 against Edison High School.

“I think this was a good opportunity to learn a lot and play against really good competition,” point guard freshman Savannah Wilson said.

The first quarter ended with Jefferson behind 6-17, the second at 12-42, and the third at 22- 47. Throughout the game, the players worked on their passes and shots, while the audience cheered on.

“I feel like we’re really gelling as a team and getting along. The coaches are teaching us well, writing up good plays, and we’re bonding well. We also have a lot of good leaders on the team, and everyone’s always there for [each other],” Wilson said. “Sometimes we struggle to finish late in the game, but we have so much potential and everyone’s trying really hard and being supportive.”

Jefferson’s girls varsity basketball team has currently won six out of fourteen games, and they have eight more to compete in before the season concludes.

“I’m excited to have rematches against the teams that beat us so far in our conference because we haven’t been playing very well the past few games, and they were on the road, so I’m ready to play them at home and get some revenge,” center freshman Mallory Brodnik said.

The results of this season, consisting of measurable increases in scores compared to previous years, has caught the attention of many Jefferson students and outside viewers. The players practice for two hours every day, except Sunday, and lift on Wednesdays and Saturdays.

“Defense is definitely our best. I think we’re really good at communicating to each other on the court and our bench especially, gets the energy up a lot,” Brodnik said.

The games are generally viewed by the families of players and few other supporters, so athletes encourage more people to show their Jefferson pride at matches.

“We need more people to come to the games,” Brodnik said.